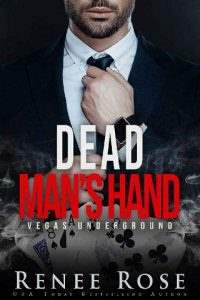 First the burning. Then the blood seeping through my fingers. Always the sound of Paolo croaking my name over the crack of more gunfire.

It’s the horror of loss ringing in his voice that makes my heart pound. Not the pain. Not my own fear of death. I don’t think about my demise in the moment. I didn’t when it actually went down, and I don’t in the nightmares that plague me every night.

And always the girl.

She’s in every nightly replay. Sometimes she gets shot, too. Those are the worst. My inability to rescue her, to protect her from damage makes me want to die right there. Other times she runs to me, after I’ve been shot. She wraps her arms around me and we both fall down.

Always her wide blue-green eyes lock onto mine the moment the first gun fires. I watch the terror fill them as the bullet tears through my middle.

That’s the moment that keeps her in my dreams. In that split second, in the window where I’m sure I’m going to die, hers is the face I see. My fears are for her safety, and my anguish over being shot is that I can’t protect her.

In her gaze, I swear I see it all mirrored back at me. She, too, thinks I’m going to die, and her anguish is in not warning me in time.

Because she tried. I remember every millisecond of that part. The five breaths before I got shot. I remember the way she tried to signal with her eyes. The way she refused to leave and get to safety, even though she had to know her cafe was about to explode in glass and wood and bullets and blood.

She’s like an angel in the dreams—her pale face the beacon I use to understand my own death.

Only I don’t die.

And you’d think that would make everything crystal clear. The whole near-death experience thing. It’s supposed to make you realize what you regret. What you desire. And then you get a second chance to make good on life.

Instead, I’m trapped in a nightmare-induced fog. Trying to untangle the meaning while I go through the motions of living.

The Caffè Milano girl doesn’t have the answers—I don’t know why or how my subconscious assigned so much meaning to her. She was just caught in the middle of a bad scene between the Russian bratva and our outfit.

And yet I can’t get her out of my mind.

The angel of my death.

Marissa. An innocent girl I have no business sullying.

A girl who already saw too much.

Some things you can’t forget. You can’t unsee. Can’t unhear.

Blood all over these floors. The sound of gunshots. The way my heart stopped when Junior Tacone pointed that gun at me, deciding whether to let me live or die.

I hate this time of day when the customers thin out, business gets slow, and I only have time to remember.

It’s been six months since the battle between the Russian and Sicilian mafia went down in Caffè Milano, and I’m still jumpy as hell. Still examining every customer who comes in, praying he’s not Russian mafia come for revenge. Or to shake me down for information on how to find the Tacones.

But they haven’t come. No one ever came except the Tacones with their window repair guys and a large enough amount of money to upgrade our whole kitchen. Which was good because our walk-in cooler was inches away from dying and this place hasn’t had a remodel since my grandparents opened it in the 1960s.

I pull a bowl of pasta salad from the deli case to put in the walk-in overnight. When I come back, I freeze, a gasp hitting the back of my throat.

At first, I think it’s Junior Tacone standing at my deli counter.

The guy who went gangster on my place and gunned down six guys. The one who is supposedly the protector of this neighborhood.

It’s not Junior, though. It’s his brother, Gio Tacone, the one who took a bullet out on the sidewalk. The man I thought was dead.

“Mr. Tacone!” I curse myself for sounding breathless.

He knows my name!

That’s more than I can say for Junior, the current head of the family. And I wish it didn’t do fluttery things to my insides, but it does. Gio rests a forearm on the counter and pins me with a dark-lashed hazel gaze.

He is pure man-candy. With those chiseled good looks, he could easily have been an actor or model, and he has the charm to match.

“You’re alive,” I blurt. I hadn’t heard that he survived. I checked the newspapers and Googled his name after the shooting, and there weren’t any reports of his death, but I saw him take a bullet with my own eyes. “I mean, you made it. I’m so glad.” Then I blush, because, yeah. I’m probably not supposed to talk about what happened, even though it’s just the two of us here.