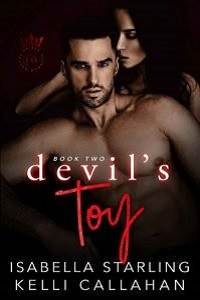 Spending a night without Violet was proving to be complicated - not least of all due to my raging hard-on.

Just thinking about her cooped up in that little cage made my cock swell with the need to be plunged inside her. I wanted her. I craved the silky brush of her skin against mine, the way she begged silently with her eyes. Goddamn, I even missed her brattiness.

I woke up at the crack of dawn the next day, throwing on some chinos and a white shirt and strolling into the playroom. I stopped between the doors, my thumb hooked carelessly in the belt loop of my pants. Violet was awake when I arrived, her pretty face streaked with tears. She sat up when I walked in, her eyes following mine as I made my way into the room.

"I hope you slept well, princess," I told her in a low growl. "Are you ready to apologize to me?"

She looked right at me, those big green eyes red-rimmed and surrounded by the thickest black lashes I'd ever seen.

Everything inside me told me to stay calm, even when I wanted nothing more than to slap that smug smile off her pretty face. Instead of succumbing to my urges, I knelt down next to her, my eyes finding hers.

"You're not going to apologize?" I asked her in my sweetest voice, and she shook her head vehemently. "Is that so, princess?"

"Yes," she managed, but as scared as she looked, she wasn't backing down.

"I'm giving you one last chance," I ground out, and she slid forward, fingers wrapping around the bars of her cage.

Her eyes met my glare with a defiant one of her own, and she took the greatest pleasure in turning me down yet again, loudly exclaiming, "No!"

"Stubborn little thing," I muttered under my breath before straightening up and unlocking the door of the cage. "Get out, princess. Kneel by my feet."

She only hesitated for a split second. It was almost adorable how willing she was to follow the commands that gave use to her body, but the mere word 'sorry' made her stubborn as fuck. It was like she couldn't force that word from her lips. Like it didn't exist in her goddamn vocabulary.

Well, we're going to change that, I thought to myself. Brats get taught a lesson, no matter how pretty they are and how good they look on their knees.

"Look up at me," I went on, and Violet raised her eyes to mine. "You're going to be punished for saying no to me. Nod if you understand."

She bit her bottom lip, and after a second, nodded without breaking her stare.

She stood up, stretching out her muscles and moaning with relief. I walked over to a bench with a vibrating toy strapped on the saddle on top.

"Come here, princess." I motioned to her as the words left my lips.

She came closer, every step was more fearful than the one before.

"Sit down," I growled, and she shivered before me. "Not on the toy, right behind it."

Her shoulders sagged with relief, but only because she had no idea what was waiting for her.

Violet sat on the bench, and I strapped her legs into the harnesses that would hold them in place. I did the same thing with her wrists, and soon, she was completely immobile with the still-for-now toy pressing against her pussy.

"Yes, princess?" I asked, kneeling next to her.

She still remembers one thing I taught her.

"I want to..." She swallowed, thick and loud. "I want to apolo-apologize."

"You do?" I asked, smoothing down her hair. She whimpered and nodded. She looked so helpless like that. "Well, I told you it's too late for that, Violet. Now you have to pay for being a brat."

I parted her pussy lips and she let out a long gasp when she felt the toy touch her sensitive clit.

"Hope you're wet," I told her impassively. "Otherwise this is going to hurt."

I’ll enjoy it either way.

I turned the toy on and Violet mewled when it started vibrating right against her most sensitive spot. My cock throbbed as the defiance in her eyes was replaced with excitement. I waited for the moment when the toy brought her dangerously close to climax before I moved from the spot where I was standing.

"You don't get to come," I told her sternly, walking over to where my most pain-inducing toys were held. My fingers brushed dangerous-looking whips to the sound of my princess begging softly. "For every time you do - if you dare - I'll whip you ten times. So you better hold it, Violet."

"Hold it," I ordered, and listened to her whimpering moans like they were a symphony. "You'll stay right there on the edge of an orgasm as long as I demand it. Then, if you're a good girl, I'll let you come for me."