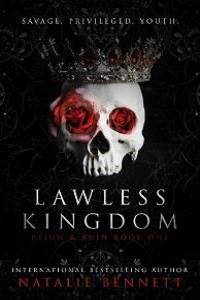 Olivia O’ Brien—We Lied To Each Other

It wasn’t sugary and sweet.

Nevertheless, it grew into something bigger than either of us expected.

He could’ve had anyone.

I could’ve been free.

The moment he chose me, we became an endless, infinite us.

One town. One school.

One illicit affair that would span a lifetime.

If I were ever asked why I stayed, why I chose to love him back…that was inevitable.

If I didn’t love him, no one else would.

What did the wolf want to do to Little Red?

And that’s exactly what he did.

Jagged pieces of mulch dug into my spine as my back bowed, the plastic crinkling. The warped wall of the shed was the only thing near enough for my fingers to grasp at. Breaths shallow and quick, I did my best to obey his coldly spoken command.

It was an impossible demand.

How could I stay quiet as his warm tongue moved in and out of a place no one but me had gone before, stroking, sucking, and teasing every soft, delicate part of my pussy?

Vibrant red swirled with traces of dirt all over smooth flesh. My legs began to tremble, and I fought to control the moans rising in volume. He stared up at me, gunmetal eyes blazing from beneath the mask of a wolf. They were like two mini moons in the darkness that surrounded our sweaty bodies.

His teeth flashed, and then he was lapping at my clit, sucking the entire bundle of nerves into his mouth, thrashing it with the tip of his tongue. My ability to remain silent evaded me.

“Oh, my god!” I sucked in a lungful of air, arching upward as a cooling rush hit my core. He placed a hand over my mouth to muffle my cry, adding traces of blood to my cheeks.

Trailing soft kisses up my inner thighs, he moved up my body, poising his sinewy frame above me.

Unable to fully see his face, I was left spread open to nothing more than a concentrated stare and a devious grin drenched in my juices.

I’d lost track of how long we’d been in our own little word. He’d asked if I wanted to be fucked like a whore before dragging me in here.

I did. I really did.

My pussy was wetter than it had ever been, aching to finally be filled.

This beautiful stranger who was degrading me in the best way possible.

It was something ripped right out of my darkest fantasies, as vivid and real as the body we’d left out in the woods.

Feeling his cock running up and down my slit, I was unprepared for his sudden entry. He shredded the small barrier as easily as one would rip a sheet of paper, seating himself balls deep.

Quick to muffle the scream that tore from heaving lungs, he withdrew and thrust back in, a mix of arousal and blood smeared on the head of his cock.

The burn—the unexpected stretching—had tears springing to my eyes. I clawed at his arms, nearly demasking him. He kept me imprisoned beneath him, repeating the motion again and again, speaking sick, vile words into my ear until I was lost in the sensation of him, moaning in pleasure and begging for more.

He fucked me hard, thoroughly making my body his. The pleasure and pain became too much, but we were just getting started. He pinned me with a bloodstained hand clasped around my throat, ensuring I received every thick, solid inch of what I’d been craving.

It looked like something out of an 80's horror flick. I glanced at Mom and saw my inner thoughts reflected on her face. She never was any good at hiding her true feelings.

Our eyes met, and we shared a look behind Dad's back, my tawny clashing with her cornflower. Neither of us said anything, though. Raining on his parade would be the equivalent of stealing a child's candy. It had been a long time since he was this cheery and animated. We both knew his happiness was long overdue.

So, despite our new home looking as if it were ripped straight up out of Amityville with the massacred ghost of the past lingering inside, Mom and I both smiled, swallowing down our negative opinions.

"After a fresh coat of paint and some lawn care it'll look brand new!” Dad raved like a used car salesman.

I didn't know about all that, but the whole being positive thing had Mom and me agreeing regardless. He waved his hand in a come-hither motion and started walking again. "Let’s go, I wanna show you the inside."