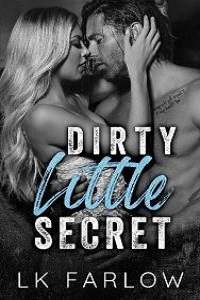 “I’ll be back!” Orion shouts, kicking his bike and pedaling down the driveway.

I watch forlornly as he gets smaller and smaller the further away he rides, until eventually, he turns out onto the street. “It’s not fair,” I mutter, sulking on the bottom porch step, my arms crossed over my chest. “Stupid Orion gets to do everything.”

“Stelli Bear.” My dad sits down on the top step. “It’s not safe for you to ride your bike on the road. You could get hit by a car.”

“So can Orion.” I turn my glare toward my dad. “Or are you magically protected from becoming roadkill when you turn fourteen?”

“Stella Louise!” Dad’s tone tells me he’s not playing. “I’m not going to apologize for wanting to keep you safe.”

“But it’s not fair.” I sound like a whiny baby, but I don’t care. At eight, I’m practically already in double-digits, which is basically a teenager. So…

“Your brother will be back soon.”

“With another stinky boy.” I stand and plant my tiny fists on my hips. “Then there will be two of them to pick on me and ignore me.”

“If your brother’s so terrible, why are you so mad about not being able to tag along?”

I cringe at my dad’s word choice—tag along—that’s what Orion calls me when he’s being a butthead.

My dad grins, which only makes me madder.

“I’m going to the field.” I start toward my bike. “Or is that not safe either?”

“Stop being a brat, Stelli.” He stands too. “And wear your helmet.”

Begrudgingly, I strap my helmet on before tearing off down the path that leads to my special spot. Who cares if I can’t ride my bike on the big road; I can pedal down to the field—my field—and climb my favorite tree and that’s better than hanging out with my stupid, smelly brother any day.

The sun is high in the sky by the time I make it to my spot, which means it’ll be lunchtime soon, which means I better get to climbing if I want to reach the tallest branch.

I promised Mama and Daddy I wouldn’t go up to the tippy-top, but Orion told me you could see all the way across the valley from there and I want to know if it’s true.

Plus, he said I’d never make it to the top because I’m a wuss—which is a bald-faced lie! I’m not a wuss!

I plan my route up as I approach my tree. The branches get smaller and farther apart the higher up they go, but I know I can do it. I’m big and brave, almost a teenager—sort of—and definitely not a wuss.

I grab the lowest branch and hoist myself onto it, climbing quickly to the halfway point, where all of the branches shoot out into smaller limbs. This is where it gets tricky.

Slowly, I test the strength of the branch. It seems good—plus it can hold Orion, so it can definitely hold me.

It takes some time, but finally, I make it to the very top… only to realize my stupid brother is a stupid liar. You can’t see anything from up here except the tops of other trees.

But still, I made it and that has to count for something. I can’t wait to rub it in his dumb face.

“Speak of the devil,” I mutter to myself, not really knowing what it means; but Mom says it a lot, so I do too.

“Smalls, where are you?” I keep super silent. I’ve always been better at hide-and-seek than Orion. He’ll never find me. “I see your bike, so I know you’re here!”

“Are you sure she’s out here?” I don’t recognize the voice, but it must be the boy he went to invite over.

“Why is she hiding?”

I can’t see them, but I know my brother rolled his eyes. He’s always rolling his eyes now. It makes Mom and Dad really mad, so I try my hardest not to do it.

I shift myself just enough to be able to see them through the leaves. Orion looks as dumb as ever, but his friend… he’s the handsomest boy I’ve ever seen.

Even from way up here, I can see his tan skin and blond hair. He looks like he lives at the beach and spends all day outside. I’ve never been to the beach…

“Stella! Mom said to come home for lunch! So, knock it off and come on!”

“Fine!” I call back and both of their eyes fly up to where I’m hiding in the tree.

“Jesus Christ, Stella!” Orion shouts. “What are you doing up there? Are you insane?”

“What are you talking about? Just… just come down!”

“You said I could see across the valley from up here and you lied!”

“Smalls, I was just teasing you. I-I didn’t think you’d climb all the way up there.”