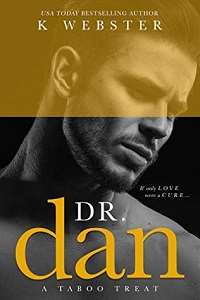 “I’ll wash your car,” Morris says, waggling his brows at me.

Evan Morris—Brown County Hospital’s playboy—doesn’t wash cars. He pays people to do that shit for him. If I gave in, he’d pay one of his groupies to do it. Negotiating with Morris takes a helluva lot more calculation on my end. A car wash is too damn easy and he knows it.

The bastard smirks, his blue eyes flashing with mischief. He’s fifteen years my junior and I always wonder if I was a smug little shit back then too. I don’t remember being a spoiled brat at thirty and I certainly didn’t sleep with half the staff at BCH.

Crossing my arms over my chest, I eye him with scrutiny. Silver spoons can’t buy muscle mass much to Morris’s annoyance. I may be just shy of my forty-fifth birthday, but I annihilate when we go to the gym together. His blue eyes flicker to my biceps that are bulging against the fabric of my baby blue scrubs, causing him to stand a little straighter and to fluff his pretty-boy blond hair that women seem to fumble all over themselves to touch.

“My car is fine,” I start, one corner of my lips lifting. “But yours…”

I shrug my shoulders as though I don’t care. “Fine, you get the next broken nosed belligerent asshole from Blarney’s Bar who’ll puke up green beer all over your pretty shoes.”

For an ER doctor, that’s a problem.

“Aww, why do you hate Dr. Venable?” Chrissy, an ER nurse and one of Morris’s newest bedroom conquests, asks him.

He flashes her an easy smile, but I can tell it’s not genuine. From what he told me at the gym last week, he fucked and ran because she was clingy as hell. Serves him right. When you sleep with your coworkers, that shit will bite you in the ass eventually.

“We were betting on who gets to deal with the next drunk patient. If he lets me take his car home tonight, then I’ll take them.” I shrug and Morris glowers.

Chrissy grips his elbow. “They just brought in a new patient. I’d give him the car for the night,” she warns. “Wasted partygoer. Possible alcohol poisoning.”

“Fine,” Morris grumbles. “Greenie is all yours.”

“And so is your new 911 Carrera S model. I’m taking her for a spin tonight,” I tell him with a victorious grin as I walk backward down the corridor. “I’ll pick her up in three hours for our date. Don’t wait up for her.”

He scratches at his jaw with his middle finger, discreetly flipping me off. I laugh before turning and striding along the squeaky linoleum floors on a mission to meet my next patient in triage. St. Patrick’s Day is one of our busier days in the ER. Not as busy as Independence Day or New Year’s Eve, but it’s up there. Anytime you have a holiday that loosely revolves around drinking, it means you have more careless people getting themselves into all sorts of shit.

But I love my job. Can’t complain. I never settled for anything less than the constant excitement of what the emergency room brought in. It varied from sickness to mangled and barely breathing car accident victims. Each time the double doors open and the EMT rushes in, it’s a surprise. You don’t know which skill you’ll utilize that day. I’m not sure I’ll ever move into surgery or oncology or become a general practitioner. Doing essentially the same thing day in and day out is boring. Besides, if I had settled into a specific field, I would’ve probably never met my daughter.

Less than a month ago, a girl walked in looking just like a woman from my past. It was eerie as fuck. Eerie enough that I boldly asked for a paternity test. Turns out, I am the father of an eighteen-year-old girl. And now she lives with me. As strange as it was staring at someone with my same jade-green eyes, it also filled a hole of longing. I’ve been married to my career for so long, but I’ve never settled to build a family. For nearly a month now, though, I’ve been given a daughter and it’s incredible. Scary as fuck that I’ll somehow mess up this parenting gig, but also cool as hell.

“Dr. Venable,” Lin greets, a chart in hand as she bounces up to me.

Lin is barely five feet tall and is built like a child. She may be a nurse, but she’s smarter than Morris. And she’s never climbed into bed with him, which makes her smarter than the rest of the staff. I like working with Lin because she knows her shit and doesn’t goof around.

“Possible alcohol poisoning?” I ask as I scrub my hands at a sink. “That’s what Chrissy said.”