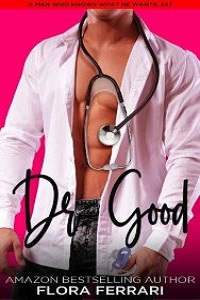 I sit in the waiting room of the fertility clinic with my hands in my lap, wringing them together as anxiety surges through me and threatens to make me leap to my feet and make for the exit. It’s a wonderful day outside – the sun gleaming brightly, birds tweeting – but in here it seems closed off and musty.

But that’s probably my nervousness coloring my perceptions, making things seem far worse than they are.

I have to remind myself I’m the one who chose this clinic, who chose the renowned Dr. Miller Marshall to help me pursue my dreams of becoming a mother. I know it’s not the most conventional route, seeking artificial pregnancy at twenty-one when I haven’t even got a boyfriend, but I’ve wanted a family ever since I was a girl and I lost mine.

My aunt Jackie took me in after my family died, but she was busy with her script-writing career, spending her time in various Bohemian getaways around America and sometimes in Europe. She was always loving and kind… when she was there. She simply wasn’t there that often.

I let out a shaky breath, glancing at the poster on the wall of the cute-as-heck baby, his eyes half-open and a heart-melting smile on his face. I have to force myself to breathe slowly when my eye strays to the poster on the left, capturing Dr. Miller Marshall in all his rugged handsome silver-fox glory.

He’s forty-five – I did some internet digging – and around six and a half feet tall, with intense dark blue eyes and silver hair cut short. His mouth twitches into a smirk in the photo, and even without the aid of video, I can imagine the way his muscular body must be pulsating under that doctor’s coat.

I swallow as I study the source of my nerves.

Not the prospect of becoming a single mother at twenty-one.

This is what I want, what I’ve dreamed of for more years than I can believe, bringing life into this world and flooding a home with happiness. And when Aunt Jackie passed she left me enough money to make my dream come true.

It’s not what I’m going to do that floods me with nerves.

It’s the interview Dr. Marshall requires of all his prospective patients before he agrees to help them pursue their dreams of becoming parents, especially in the voluntary single mother cases. His website states that he will not help anyone unless he has spoken with them first and he refuses to budge on this matter.

I know this because I spent a lot of time on his website last night, staring at his various photos.

The best was from a charity event he did at a local gym, leading a fitness class that was free to all.

There was one photo where he stood at the front of the class, his T-shirt soaked with sweat, the fabric hugging his body tightly to show the outline of his bulging muscles.

I couldn’t help myself as I stared at it, heart hammering in my chest, making every part of me tingle.

I lay back and slid my hand down my body, palming my sex, imagining his hands smoothing up and down my hips and then over my breasts, squeezing onto my nipples as he gazed at me with those unflinching predator’s eyes.

I know he hasn’t got a wife – she would be mentioned online – but he probably has women throwing themselves at him all day every freaking day. He’s been on TV hundreds of times. He’s written bestselling books. He’s a celebrity as much as he’s a doctor, and if it wasn’t for Aunt Jackie’s inheritance I wouldn’t even be able to afford him.

He’s more than twice my age.

That doesn’t bother me. My insides shiver at the sight of his silver hair, at the experience in his eyes, but I bet it would bother him.

He’d probably laugh if a twenty-one year old inexperienced woman even deigned to offer herself to him, not that I’d even know how to go about doing that. I’ve never been very good with men, despite what Derrick said, that freak, the twisted pedestal he’s put me on.

I sigh and glance down at my interlocked hands, forcing myself not to look at the photo of Miller again. I can’t stand to look at him for too long, especially not when I’m out in public and the receptionist is just a few feet across from me, tapping away at her keyboard with her fake nails.