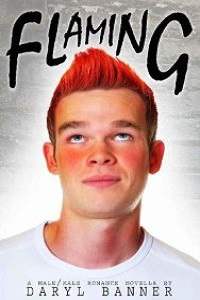 Zakary Tisdale, naked as his birthday and still wet from his shower, stands in front of the bathroom mirror with his phone in hand, stunned speechless. Did he really just type “Never have I ever dyed my hair a wild color” into the very public and very accessible Heart2Heart Never Have I Ever forum, which nearly all his peers paid keen attention to? His thumb, still hovering over the “POST” button he just tapped, trembles with mounting anxiety.

What did he just do?

Did he just commit himself to dyeing his hair?

Not necessarily. He can easily delete his measly ten-word contribution to the thread. He only just now posted the words. Likely no one he knows from his theatre company has even seen them yet, right?

Then, before his eyes, his comment gets a thumbs-up from the costume designer.

Then one more from a member of the props department.

Then a reply: “Better dye it loud and proud!” That’s from the whacky sound board operator.

Zakary bites his lip and laments. He isn’t one to stand out in any crowd. Despite his impressive six-and-a-half-foot height, long build, and awkward broad-shouldered shape, he prefers not to be the one everyone looks at in a room. That’s why he’s happy as ever to work as a humble, invisible stagehand for their current production instead of being one of the brave actors onstage.

Even if he knows every line.

And sometimes imagines himself in front of the audience.

And sings loudly in the shower when he’s all alone.

Another thumbs-up dings on his phone from a member of the lighting crew, followed by the reply: “Can we vote on a color? I choose eggplant with bright electric blue highlights.” That reply is then dinged with a couple other thumbs-ups, and the assistant director’s girlfriend (how did she get on this forum??) chimes in with: “Oh, dye it bright yellow with black stripes! Then your new nickname can be Bumblebee Boy.” Laughing emojis follow from a couple of ladies on the costume crew, followed by another thumbs-up from one of the actors.

Zakary rolls his eyes, sets his phone down, and grips the bathroom counter as he lowers his flushing face and glares at the floor. His heart is racing. “Why didn’t I just ignore the dumb forum??” he mumbles to himself, mortified as he fights the flames that rush up his cheeks.

What does it matter, anyway? He can just ignore all the taunting, forget he participated in the silly game, and go about his life. Sure, he may get some remarks at the dress rehearsal tonight, calling him “chicken” when they see his hair is the same boring shade of light brown as it was before, but it’ll blow over; no one will even remember by opening night tomorrow.

Then his phone dings once more. Zakary lifts his eyes ever so slightly.

It’s a new comment from Hudson, the leading actor in the play: “Don’t get your hopes up, people. I know Zako. He won’t do anything wild to his precious hair.”

Hudson. They went to high school together. Hudson was as cocky as they come, scoring every lead in every show and never giving Zakary the time of day. Hudson always had the prettiest girlfriends and the teacher’s favor. He wasn’t even all that good-looking, yet demanded everyone’s attention.

But now they’re out of school and in the real world, making theatre together as part of the same company. Hudson is still cocky as ever, but there are chips and cracks around the edges now. He isn’t surrounded by the constant stream of flattery and validation that came pouring from his friends, family, and their totally-biased-and-easily-won-over theatre teacher. In the real world, Hudson faces real challenges, praise comes less easily, and he doesn’t always score the lead role.

But he scored this one. And Zakary has suffered every last second of it for the past month. The words still sting: He won’t do anything wild to his precious hair.

Zakary grits his teeth. Determination fills his racing heart. He swipes the phone off the counter, goes to his closet to throw on some clothes, then tears out of his apartment without even so much as a goodbye to his “sorta” cat, who watches him leave from her perch at the windowsill by the fire escape, bewildered.

A brisk fifteen-minute walk and seven-minute wait later, he’s in a chair in front of another mirror—at his neighborhood salon.

“You picked out a color yet?” asks the stylist.

Zakary may be trembling with fear inside, but his words are as solid as stage weights. “Red. Loud. And flaming.”

“Holy crap, you actually did it.”

“Does it hurt? It looks so red that it hurts.”

Zakary, whose hair was already a thick, wavy mess that seemed to stand up on its own, is now a bright and flaming red beacon of fire standing nearly two inches high.