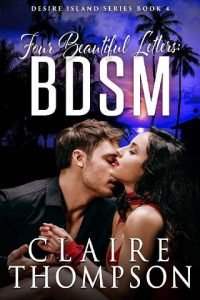 Nick Kincaid’s heart kicked up a notch as he watched the Dom lower the bound, naked submissive into the water. His mind instantly veered to that delicious, dark fantasy realm where there were no limits—no safewords. She would be bound in rope and chain, utterly helpless. Her eyes would widen with fear and desire as the water closed over her head. He would keep her balanced on the precarious edge of trust and terror, his to control…

Nick blinked rapidly, forcing the dark fantasy from his mind.

Before submerging Skylar, Caelan Macauley, their seminar leader, had wrapped her ankles together using a strip of latex with Velcro at either end. He’d bound her wrists in front of her with another strip. “Rope is sexy, but you want something you can pull away quickly in the water,” he’d explained.

Caelan stood in the plexiglass submersion tank, which was like a small, above-ground pool maybe four feet in depth, the top surrounded by a wooden platform set on sturdy beams. He cradled Skylar in one arm, his other hand over her nose and mouth.

“Her safe signal,” he said, “is to raise her bound wrists above the water. That’s what you will all use today.”

Though quite a few seconds had passed, Skylar showed no signs of tension or agitation. The bound woman was utterly still beneath the water. Everything about her exuded acceptance.

After what seemed like an awfully long time, Caelan finally lifted his girl from the water. She drew in a deep breath, her eyes fixed on her Master.

“Thank you, Sir,” she said softly, her face radiant with submissive adoration.

“My pleasure,” Caelan replied, gently stroking the wet hair from her face. The love that moved between them was palpable. In spite of himself, Nick experienced an almost painful clutch of longing for what they seemed to share.

Caelan pulled the bindings from Skylar’s wrists and ankles and set her gently on her feet. As they climbed out of the tank and dried off, Caelan talked about the necessity of working closely with your sub to assess their skill with breath control and their comfort level with under-water bondage. “If you’re new to this, start slow. And subs—don’t hesitate to use your hand signal if you need to. Safety first.”

Skylar climbed down the outer ladder of the tank, her hair streaming like wet honey down her back. She lowered herself to a padded mat nearby, the serene glow still on her face.

“Who wants to try it out first?” Caelan, who had remained on the platform, asked.

“We’ll go,” he said now, pulling Susan, who was equally short and round, upright. Both had on bathing suits, and Susan wore a gold choker with a padlock dangling from its front.

The woman who’d introduced herself as Sophia sat at the end of the row to his right. Nick guessed her to be in her late twenties or early thirties. She had blue-green eyes, in rather striking contrast to her dark hair, which was a riot of long, springy curls. While the couple on his left were both dressed in leather fetish wear, Sophia wore a brightly-patterned sundress, flip-flops on her feet.

Nick returned his focus to the tank. Marty and Susan had chosen not to use the binds for their first submersion experience, and Susan had opted to keep her bathing suit on. As he watched Caelan guide them, Nick’s gaze drifted back to Caelan’s sub, Skylar.

She sat back on her haunches, her hands resting on her thighs, a calm, serene expression on her face. She had introduced herself as a staff slave and as Master Caelan’s personal property.

If someone was so willing to give herself over to that degree, would it be difficult as a Dom to avoid the slide from consensual submission to something darker?

“Who’s next?” Caelan asked, once Marty and Susan had returned to their seats, wrapped in large towels.

Sophia rose from her seat. “I’d like to go next.” She glanced toward Nick. “Care to join me?”

Nick got to his feet. “Sure,” he replied. “Let’s do it.” He had worn his swim trunks in place of shorts. Now he pulled off his polo shirt and kicked off his sandals.

He was pleasantly surprised when Sophia reached for the hem of her sundress and lifted it over her head. Underneath, she was completely naked. Her breasts were full and round, the nipples like pink cherries against tan, smooth skin. She had a triangle of neatly-trimmed pubic hair covering her cleft, which Nick found refreshing. Maybe he was showing his age, but he didn’t particularly like the shaven little-girl look that was the fashion with most women he encountered.