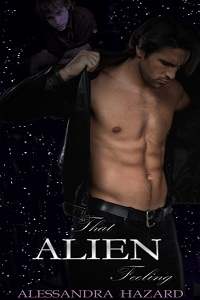 Harry loved humans. Everything about them was so fascinating. Even their names were refreshingly short and interesting, not at all like names back home.

Take Harry’s name, for example. Well, the point was, it wasn’t his real name. His real name was very hard to pronounce for humans. The muscular properties of humans’ tongues were limiting for certain types of phonetic articulation, including Harry’s native language.

Harry liked his chosen human name better than his real one, anyway. “Harry” was similar enough to his given name and sounded so nice and unusual. He couldn’t help but smile every time someone addressed him as Harry. Humans tended to give him strange looks when he beamed at them happily, but Harry didn’t mind. He had read on the Internet that it was okay to be weird and quirky as long as one wasn’t too weird. Hopefully he wasn’t.

Torn from his musings, Harry smiled serenely at the big pink man who was frowning at him. (Harry didn’t understand why humans called pink people “white” and brown people “black.” Were humans color-blind? Why did skin color matter so much, anyway? Weren’t people just people? Humans were so confusing.)

“Sure thing, dude,” Harry said, imitating the man’s speech patterns. His research said that humans responded positively to mimicking their behavior. Harry was very good at it. He rather liked the man’s accent.

The man’s frown deepened. He looked at Harry oddly. “Are you mocking me?” He cracked his knuckles for some reason.

“No?” Harry said, confused, and gave him his change.

The man glowered at him, grabbed his coffee and his change, and left, the bell tinkling softly as he exited the coffee shop.

Harry worked at this little place called Star Coffee. He absolutely loved it! The apt name aside, it was quiet and charming, and it was also the only place willing to hire him. Harry had discovered that to survive on this planet he needed money, and the easiest way to make money was to find a job. Unfortunately, he had also discovered that for a young human male without any education, job options were very limited. Harry was still a little angry at his parents for giving him only false identification documents with the name he’d chosen and a small amount of human money before dropping him in a city called London two Terran months ago.

“It will teach you a lesson,” they had told him. “We’ve spoiled you too much. Maybe the experience will finally make you grow up.”

Harry had been secretly pleased at the time. If his parents thought it was a punishment, they didn’t know him at all. He’d always dreamed of getting off his planet and seeing the universe. Humans, or Terrans, as they called them back home, had always fascinated him. Their society hadn’t yet reached the technological and cultural level required for Contact, but it wasn’t long now, perhaps one thousand years at most unless humans destroyed themselves before that. For now, Earth was used only for short, educational trips—or when one’s parents wanted to punish their child for doing naughty things like reading other people’s minds without permission. (Harry had told his parents he didn’t mean it, but, sadly, no one believed him.)

Anyway, having a real, human job was fascinating. Harry didn’t mind working at Star Coffee. His boss had kindly agreed to give him his salary in cash and Harry didn’t even mind that he seemed to earn less than the other employees. He took pride in the small stack of human money he received every month. There was no physical money on Calluvia anymore, hadn’t been for a few thousand years.

Working at the coffee shop suited him very much. It was a job that wasn’t suspicious for a young human male of eighteen years. That was his age according to his fake documents. Harry wasn’t actually eighteen; he was twenty-three in Calluvian years, but since a Calluvian year was shorter than a Terran year, he probably was around eighteen or nineteen in Terran years. Harry wasn’t sure; mathematics had never been his strongest point.

Torn from his daydreaming once again, Harry looked at the next customer.

It was a young male in a dark suit. His skin wasn’t as pink as the previous man’s. It was more golden than pink. He had very dark, very nice eyes. Harry liked dark eyes. They were so rare on Calluvia, unlike Harry’s own violet eyes.

“Hello,” Harry said, flashing the human a friendly smile. He had learned that humans gave bigger tips when he did that. Harry felt a little bad for exploiting it, but a guy’s gotta eat, as humans said.

The human smiled back, handing him a five pound note. “A cappuccino, please.”

When Harry returned with his coffee, the guy said, “Thank you, Harry.”