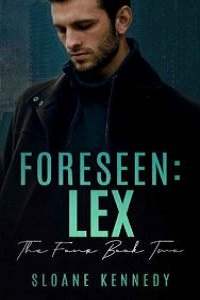 The place was quiet, I had to give it that. Hell, quiet wasn’t even the right word. Silent didn’t quite fit either. Despite knowing the woods surrounding the cabin were teeming with life, the structure itself had a cold emptiness to it. It was… numb.

I ignored my inner voice and searched out my phone. It took several long seconds of fumbling to get to the voice-to-text option. Frustration welled up inside of me as I faced yet more proof of what my life was becoming.

Was becoming? Who was I kidding? I was already there.

As tears pricked the backs of my eyes, I realized maybe I wasn’t quite as numb as I’d thought… or hoped.

“Made it,” I said into the phone before hitting send. I could only hope the phone had translated the words correctly into the text message.

I sighed when my phone rang just seconds later.

“You’re late,” King said as soon as I answered. My brother wasn’t exactly known for his ability to make small talk.

“Did you call just to tell me that?” I joked.

King was silent for a beat before gruffly asking, “Where are you?”

I sighed as I looked around what I presumed was the kitchen based on the various shapes I was able to make out. I felt around until I found a table and chairs and then sat down.

“I don’t want to do this again, King,” I murmured. My brother and I had already had this same conversation on multiple occasions and all it did was break each of us a bit more. The solution was a simple one—I could just give in and tell my brother where I was, but it was the last thing I wanted to do. I hadn’t really been able to explain my reasoning to my overprotective big brother, mostly because I hadn’t really understood it myself. When King didn’t say anything, I softly added, “I need this.”

“You need your family, Lex,” King interjected angrily. I heard a thud in the background. I knew exactly what the sound was.

I closed my stinging eyes and ran my hand through my hair. “Go take care of your hand, big brother,” I said. “And remind me to get you a punching bag for every room of your house so you don’t keep putting holes in the walls.”

“Say hi to Luca and Con for me. And Vaughn too, if you can.” The mere mention of the rest of my family had my throat closing up tight. “I’m safe, King. I promise. I’ll see you soon, okay?”

I didn’t give King a chance to respond, mostly because I was on the verge of completely losing it. I hung up the phone, then turned it off altogether. I couldn’t help but wonder if King was already on the phone with one of his tech guys trying to track the disposable phone I was using. He’d promised me he wouldn’t, but I knew at some point his fear would overshadow his desire to respect my decisions. My other brother, Con, wouldn’t have been as patient—he’d probably been searching for me from the moment I’d stopped taking his calls.

I couldn’t prevent the hot tears that began coasting down my cheeks as I thought about the men who’d been the only family I’d ever known.

I wasn't sure how long I sat there for, but by the time there was a brief knock at the side door, the tears on my cheeks had dried and some of the emptiness I’d craved returned. When I opened my eyes, I could tell that the sun was starting to fall. I automatically glanced down at my phone, but it was more out of habit than anything else.

There was another rap on the door and then it was opening.

"Sorry to disturb you, sir, but it looks like we’re going to get hit with some nasty weather overnight and I want to make sure you’ve got enough logs to keep the fire going in case I can't get the generator up and running if the power goes out."

The voice behind me faded out as the individual walked farther away, presumably to put away whatever logs he’d brought into the house. I fought back the agitation that went through me. Within a handful of seconds, I heard the footsteps again. I didn't dare look over my shoulder at the man because with the falling light, I’d have a hard time making out his shape. If that happened, I could end up giving away the truth about my condition since I wouldn’t be able to find the man to make eye contact with him.

I waited until the steps sounded like they were right behind me before saying, "Mr. Parnell assured me when I rented this cabin that I wouldn't be disturbed."