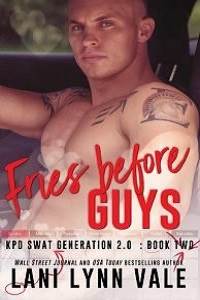 I really don’t mind getting older. But my body is taking it badly.

I don’t want to do a fucking picture for a calendar, Dad.

Those had been the words that I’d said to my father, the chief of police, two weeks ago.

Yet here I found myself, getting myself photographed, in a motherfuckin’ bed.

Or, at least, there was a fucking bed in the room.

“I am not getting in that bed,” I said to no one in particular.

Dax, who was coming out of the room as I was going in it, rolled his eyes. “Don’t worry. I got in the bed. I’m sure she’ll make you do something else… like get naked in the shower.”

I snorted. “I’m not doing that, either.”

“Don’t get too excited,” a soft, feminine voice said from somewhere in the room. “I’d planned on a totally different look for Mr. February.”

Dax slapped me on the shoulder and shut the door behind him as he left, leaving me giddy to see the owner of that voice.

Except, when I finally got a good look at the lone figure sitting on the bed, her back to me, my excitement deflated.

Because on the bed was Avery Flynn.

The nineteen-year-old photographer who was doing this photoshoot today for free.

That wasn’t to say that she wasn’t very talented. She was.

But she was also in high school and dressed—as well as acted—like a nerd.

Avery Flynn was well known to the officers of Kilgore Police Department. But not because she was bad or anything—at least not to my knowledge.

The reason for her notoriety was that Avery Flynn was a cop’s kid.

Her mother, Rhonda Flynn, had been killed while heading home from a shift by a drunk driver. She’d died after two harrowing days on life support.

She would’ve died the first day, but Rhonda had always been a helper. A person of quality and life. And Avery had decided that Rhonda’s viable organs needed to be donated.

It’d taken her twenty-four hours to convince Rader, her father, to donate.

Rhonda had saved eight lives in the following days. Her heart, kidneys, lungs, liver, small bowel, and pancreas had all been donated to seven different people. The heart even to a young man right here in Kilgore, Texas.

A young man who had been the boyfriend of a town mean girl who didn’t like the attention that Avery got from the young man after his surgery. The young girl had then set out to make Avery’s life a living hell before she’d filed a restraining order against her, forcing the girl to stay five hundred feet away from Avery at all times.

Which was tough seeing as they both went to the same high school.

Avery’s father hadn’t been around for the bullying. But it hadn’t mattered.

When Kilgore had lost one of its own, the town had rallied around his only child, making sure that the case was taken on pro bono by the lawyers. Then going even further to attend each and every trial day. Sometimes the judge would look into his courtroom and see more than half of the seats occupied by an officer.

So yes, to say Avery Flynn was loved by the cops of this city would be an understatement.

Which was why I looked at her and immediately dismissed her.

She was a cute girl, but cuteness only got you so far.

And she was still in high school.

So yeah, I was staying very far away from that.

I was so caught up in what I was thinking—Avery to be specific—that I didn’t pay attention to the girl who was no longer sitting on the bed.

I blinked, looking down at the woman—no, teenager—who was staring at me.

She reminded me of one of those nerdy anime chicks. The ones that were fabricated and staged.

She had on a pair of black leggings that fit her shapely legs like a glove. They came to a stop right below her calves, exposing about four inches of milky white skin before her black Chucks with red skulls printed on them came into view.

I had to admit, the skulls were pretty cute. Even if a bit childish.

And why the hell was I having a problem looking away from her ankle bones? Ankle bones weren’t sexy… at least they hadn’t been before Avery.

“I’m thinking we’ll go outside to the cruiser for your shoot,” she said, startling me out of the contemplation of her ankle bones.

I reluctantly slipped my way back up her body, pausing slightly on her t-shirt.

It was black like her leggings but had bold white lettering that said ‘Klingon Captain’ on it.

The shirt was so fucking baggy that I couldn’t make out a single thing.

Not the shape of her waist, or the curve of her breasts. Hell, I could almost make out her collarbone, though. Her shirt was very nearly hanging off of one shoulder. But her long, thick black hair was blocking it from my view.