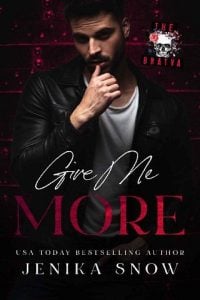 Alexa looked over at Yvgeny.

He was passed out, and if she allowed herself to lie down she would be, too.

God, she’d just slept with him, her boss, the man she cared about but knew she didn’t have a future with.

She’d slept with the man who brought out the most intense desires in her.

She’d allowed herself to drink too much, to be more forward than she’d ever been, and it seemed Yvgeny had been just as drunk as she was.

Although it’s hard to tell with a man like him.

He was always so controlled, so calm.

And despite the fact she was drunk, and he was too, being with him had been the most intense, soul-shattering experience of her life.

And just think if we’d been sober. Just think how it would have been if we’d been both right there in the moment, no alcohol between us.

She ran a hand over her face and breathed out. No, she couldn’t bring this up, not when things might very well change. She looked at Yvgeny again, at the tattoos covering his muscular body, at the power that came from him, surrounded him.

I’ve had sex with him, and he probably won’t even remember come morning.

“He looks like he’s ready to kick someone’s ass.”

Alexa looked up from the paperwork she was filling out and stared at Yvgeny.

“That’s how he always looks.”

They were at the club and had about two hours before the doors opened. Even though Alexa mainly did clerical work, for the next few nights she’d be filling in for Zoey on the floor waitressing so Zoey and Sergei could spend some alone time out of town. It was the least she could do for her sister after all the shit that had happened just a few short weeks ago.

Even now, Alexa was still thinking about Zoey’s ex, how he could have easily killed Zoey and taken the only good thing in Alexa’s life.

She pushed those horrible thoughts out of her head and stared at Yvgeny, her boss, the owner of the nightclub where she worked … and the man she loved.

They’d shared one night together, one explosive, albeit drunken, sex-filled night months ago, and it was still all Alexa thought about. But talking to Yvgeny about how she felt and what she wanted with him, was not something Alexa would venture into.

And not because he was part of the Bratva.

“Maybe someone fucked with him.”

Yeah, and when someone fucks with Yvgeny or the Bratva they get buried.

But Alexa kept her mouth shut. She knew only a handful of people that worked at the club actually knew about the Bratva or who Yvgeny was. Everyone else was blissfully ignorant of the fact.

She knew the type of man Yvgeny was.

He’d helped kill for Zoey, had his hands in all the gritty, dark things that made up the Russian underground.

Yet after knowing that, seeing some of the depraved things that had gone down on his orders—at the club grounds, no less—Alexa still wanted him.

Right before he disappeared behind the doors that led to the hallway and to his office, Yvgeny stopped and looked over his shoulder, and their gazes clashed. His short dark hair was impeccably styled, the dark suit he wore without a crease. And despite the hard look on his face, she swore she saw something flash behind his eyes.

Or maybe that’s just me hoping for something that can never be?

Yvgeny shut the door to his office, scrubbed a hand over his face, and felt exhaustion deep in his fucking bones. After taking out Zoey’s ex, cutting up the pieces, and burying the fucker in different parts of the state almost a month ago, things had been pretty smooth. No Bratva issues to handle in the States, no one else to kill for the time being, but then again, there wasn’t peace for long when it concerned his life.

He had no doubts Aleczander, the head of their organization stationed in Russia, would call in with some business. It always worked that way. If there were connections that needed to be sealed in America, someone that had fucked with the Bratva and fled to the States, or just some house cleaning, Aleczander called Yvgeny to make it right.

And Yvgeny didn’t have any issues in making everything squeaky clean. This was the Bratva, his life, his world, and he lived and died by that code.

That’s why it was so hard staying away from Alexa. Pretending like that one night with her hadn’t meant anything was hard as fuck.

Because it had meant a hell of a lot.

He did this and stayed away from her unless it dealt with business, because he needed to protect her.

But he cared about Alexa so fucking much.

He went behind his desk and sat down, but before he could do anything, the phone rang. Yvgeny knew who it was before he even picked it up.