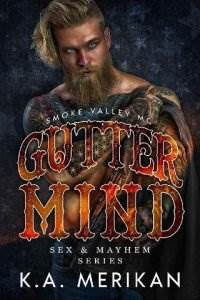 Mike stifled a yelp when the back of his head collided with a shelf and knocked off plastic bottles that vaguely smelled of bleach. But there was no going back when Mona snuck in behind him and pressed her soft chest against his arm so they could both fit into the tiny maintenance closet at the back of the store.

He’d been away for two weeks and had kind of assumed that the whole Harlyn debacle would have blown over by now, but her brothers had reappeared ten minutes after Mike’s arrival. They were out for a ring on their sister’s finger and Mike sure as hell wasn’t going to give them what they wanted.

So here he was, squashed in the maintenance closet and hiding as if his lover’s husband had just come in and she’d been forced to put Mike away somewhere.

That had been fun only once.

Mona shifted against him, and Mike had to bite his lips to stop a comment about her boobs pressing into him. “Can’t you just go fuck them up so this is over with?” she whispered, pronouncing words in the sweet cadence of her Italian accent.

Mike scowled. If it only were that simple.

“It would have made a mess in the shop. I’ve been back for less than an hour, and the last thing I want is Mom on my back.”

Mona groaned. “Some outlaw biker. Afraid of his mom. You just wanna feel me up.”

Mike’s lips stretched. “Come on, you’re my sister’s wife. I would never,” he said in a tone that suggested he would have, even though he’d pretty much classified Mona as a sister once Rain had put that ring on her finger. Throughout their trip, they’d been sleeping in the same hotel rooms—sometimes in the same bed if it was cheaper—and he’d kept it kosher.

Mike could swear he heard Mona snort in the darkness, but focused on Shay’s raspy voice out in the shop.

“I already told you Mike’s away. If you’re not buying anything, you should leave,” she said sternly. She was a small woman, frail despite her wild black hair, and the tattoos covering most of the skin she showed, but she faced the Jaren brothers with confidence, as if she were disciplining one of her four kids. The Jarens weren’t breaking her, but if they tried, Mike would have to ignore the possible damage to the store and fuck them up whatever the cost, because as the old lady of another MC brother, Shay was family.