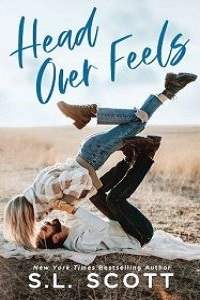 Have you ever met one of those couples who tell their meet-cute story while finishing each other’s sentences and sharing every detail of how they fell in love?

It’s annoying. Am I right?

It’s all surface and no substance. That’s not how my brain works.

Emotions have no place in my life. Never have. So this is not that kind of story.

In fact, this story starts with a blindside . . . mine, to be precise.

Even though I used to laugh at the notion of love, Cupid’s arrow shot me right in the ass just before I landed on it. All thanks to a girl.

Just to get this out of the way, we were never meant to be. At least not more than the friends we became. Enter exhibit one as evidence: how we met.

It’s a preposterous story, one with a twist I never saw coming—namely, a golden-haired beauty on top of me. Look, it’s not unusual to have a woman land on me. They struggle to keep their hands off me, but let’s keep that between us. I’m already fighting a playboy reputation, so no need to add fuel to that fire, even if it is true.

I may have been an innocent bystander to her stumbling ways, but I don’t believe in accidents. We may not be meant to be, but we were meant to meet. I’ll never forget how her cheeks flamed red, matching the strawberries squashed between us. There was something about her being sorry as I momentarily got lost in her blue eyes. That is, until her gaze lowered to the mess on my shirt, and she said, “Bam, and here we are.”

Bam is an understatement.

Seven years later, I still haven’t recovered. I hate that I stare at her when she’s not looking, and that jealousy bubbles up when I meet her dates or, worse, boyfriends. I hate that her laughter calls to me from across a room and how disappointment stabs me when her smile isn’t directed at me.

Want to know what I really hate?

That I didn’t tell her how I felt when I had the chance.

Unfortunately, that’s what got me into this mess, and now I’m caught in the middle. To fully understand the predicament I now find myself in, we need to rewind. Not to the beginning, but to the moment I promised one friend a favor and fell head over feels for the other.

(You can call me Rad. All my good friends do.)

“Such an odd achievement for a guy who breaks up marriages.” Tealey holds the crystal award in her hands. My award. One of the three Big Apple’s Most Eligible Bachelor honors I’ve received. I keep the others at home because I don’t want to boast too much.

“I don’t break up marriages.” I temper my defensiveness, noticing she couldn’t care less about the Klein & Sable award right next to it. I’m pretty proud of winning my law firm’s top honor this last year.

Trying to act casual by leaning back in my leather chair, I kick my feet up on my desk, and say, “They’re already broken when a client walks through that door.”

Relationships are complicated. I’ve traveled that road before—three times total. They lasted anywhere from two weeks to two months max. The frivolous notion of love never factored into those relationships, so no hearts were broken. Particularly not mine.

For me, dating is about companionship, something I rarely crave. And since sex satisfies my physical needs, it’s easy to separate the two. I have a contacts list in my phone that goes for miles, and the one thing they don’t need is dinner and small talk. Their needs, just like mine, are met in the bedroom. No intimacy required. No dates scheduled. No food is involved unless they’re into that kind of thing. *winks*

Yet the woman in front of me, the only person I’d consider changing my current dating lifestyle for, can only—will only—ever remain my friend.

Tealey holds the trophy in the air. “It’s heavy, like it holds the weight of bachelorhood inside.” Her laughter is light, almost as if for herself.

I anchor my feet back on the floor. “I don’t know about the weight of bachelorhood, but it definitely holds my reputation.”

I could be offended, but she’s right on the money. “That’s fair.”

She smiles, her eyes darting from the award and then back to me. “What do they base this on?” she asks. “Really.”

She’d make the worst attorney in the world. She’s unable to hide her emotions since she wears her heart on her sleeve. Her displeasure causes her to purse her lips and narrow her eyes as if the award in her hands personally offended her. “You’re more than connections and financials, Rad.”