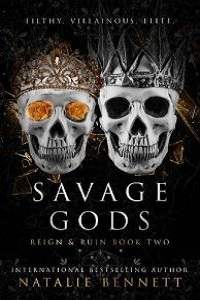 There is so much hurt in this game of searching for a mate, of testing, trying. And you realize suddenly that you forgot it was a game, and turn away in tears.

A meaningless life is an easily forgotten one. I’d seen this proven too many times to count and it was happening again right now. I stood beside Gavin watching everything that remained of Daxton disappear along with the runner’s taillights into the night.

His body had been broken into pieces, simplifying the process of taking him away in compressed nondescript boxes that would soon be burned and then scattered miles outside of Crudele. The stench of sawdust, body fluids, blood, and severed flesh still lingered inside my garage.

It would need to be fumigated again before I could go back to Rhiannon.

“Does this seem anti-climactic? Is it just me?” Gavin asked.

His lack of response said he knew that too. I wasn’t any more satisfied with this outcome than him. I would have preferred that each piece of Dax be flushed down the toilet like the meaningless piece of shit he was.

Daxton had been a cousin through marriage, a fragment of a twig on the Barron famiglia tree. He’d proven to be a disloyal snake years ago and that’s what led to him becoming a pawn. Now that he'd been used to his full extent, he had to be disposed of. It was the natural cycle of life for those who weren’t worth the air they breathed.

He'd still managed to grant himself one of his final wishes—getting out of Crudele permanently.

I couldn’t wait to do the same. All I wanted to see of this insignificant town was it fading away in my rearview mirror. Shame I couldn’t burn the whole place to the ground, but it still had a purpose to serve once I was long gone.

Unlike my recently departed cousin, my name wouldn’t be reduced to a mere echo in the halls of a prestigious high school, fading a little more every day until it was all but forgotten. It would continue to be spoken just as I would go on to become more prominent.

Crudele was my timestamp of sorts, a place I could bring up on a GPS and say I was here once if ever asked of my whereabouts. It held no sentimental value whatsoever. I didn’t understand how the people here settled for such mediocracy.

When I saw the guys my age, the way they lived, and having a vague idea of what their futures would be like, it wasn’t envy that burned through my gut, but pity.

Maybe it was due to the way I was raised. We shared little to no common interests. I didn’t care for the variety of pussy, the parties, or the never-ending popularity contest.

I was meant for far greater things than playing king of a fucking classroom and presiding over a local ice-cream shop. There was no real power in that. I simply did what I had to in order to blend with society. No matter how badly I preferred to remain in a small circle of contacts, connections would always be far more important.

I couldn’t be a social pariah and get to where I wanted to be. I’d have to do this shit for the rest of my life, like every other Barron before and after me had and all my children would.

Gavin pulled his phone from his pocket and tapped the screen. “Five forty-two.”

“You should try and get some sleep. I’ll meet you at Pesadilla in a few hours.”

I shrugged his question off and turned back towards the house.

I’d already slept the few hours I normally would while he, Owen, and Bri finished with Dax. My mind was too full, my bed too occupied for me to entertain the idea of sleeping any more than that.

There wasn’t much time left before we finished with what we came here to do and before we left, I needed to make sure we wrapped things up smoothly. This went deeper than revenge.

It was far bigger than a simple feud between two families. Those were merely key pieces on an ancient gameboard.

Each served a purpose, just like the girl in my bed. The difference being she was far more important than any of the others.

I almost regretted that she wouldn’t know this anytime soon and when she did it would be a trivial confession at best. I couldn’t put everything and everyone at risk because of my emotional attachments.

Hearts were always broken in a rise to power. There was no way around that. I’d go as far as to say it was tradition. It was a test of determination and devotion. You break the heart of the person you love and then safeguard the bloodied pieces until they could be forced together again.