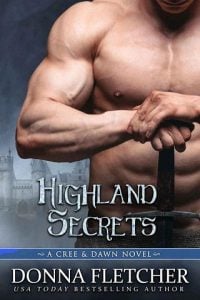 “You are not going with me,” Cree said for what seemed like the hundredth time and still his wife continued to make her garments ready for travel, folding them neatly on the chest in their bedchamber. “You may not be able to speak, but you can hear me and hear me well you will. You are not going with me and that is my final word on it.”

That she continued to ignore him did not bode well and though she had no voice to argue with him—no voice since birth—she still found a way of making herself heard. He had admired that about her since he had first met her. She did not shy away from people or life itself due to her affliction. She had embraced it, made more of it than most would have, and lived with courage.

It had taken a tremendous amount of bravery to love him, once an infamous warrior who had plundered and killed for coin. But in the end, the endless battles had earned him and his faithful warriors a home and him a title. In his battle for both, he had been lucky enough to find Dawn. That was nearly three years ago, and their family had grown with the birth of their twins, Lizbeth, a handful like her mum, and Valan, a lad with quiet strength.

“Dinnae think by paying me no heed, it will change anything,” Cree said, trying to keep his annoyance at bay.

Dawn turned a smile on him, then returned to folding her garments.

The woman continued to steal his heart with every smile. Most would think her features plain, not Cree, to him, she was the most beautiful woman in the world. Her long, auburn hair highlighted her flawless skin and he loved when she let it fall loose unencumbered by a tie or braid. He loved burying his face in it at night when she slept snug in his arms. It always held a lovely, sweet scent. He would miss that—miss her—while on this journey.

“You know full-well why I forbid you to go with me,” he said and when she turned a scrunched brow on him, he knew she took umbrage with the word forbid. Forbidding his wife to do something only made her more determined to do it. And in case she forgot, which she had not, he reminded her. “You are four months away from delivering our third child. I will not take the chance of anything happening to you.”

She patted her stomach, that had gained visible roundness in the last month, and smiled.

“I know you feel well carrying this bairn, better than when you carried the twins, but that does not mean you travel on a four-day journey to an area that has more mysteries and myths than the whole of the Highlands. And with people disappearing at the Clan Strathearn, I will not chance you being one of them.”

Dawn smiled and pointed to the large sleeping black dog curled in front of the hearth.

“I am glad for Beast. He protects you when I am not near, but he cannae protect you against the unseen that is abducting the people from Clan Strathearn.”

Sadness filled Dawn’s eyes for Clan Strathearn as she shook her head and with a few gestures explained away his concern.

Cree stared bewildered at her. “You think an amulet from Old Mary will keep you safe?”

Old Mary had proven a skillful seer and a long, beloved friend of Dawn’s. But to leave his wife’s safety to an amulet was not something he was willing to do.

“It matters not if you feel well, or Beast is with you, or you wear an amulet. You are not going with me. You will remain home where you will be safe.” He made sure to use his most commanding tone so there would be no doubt she would obey him.

Dawn dropped the garment she held and turned, her chest rising and falling with a heavy sigh. She pointed to him, then pointed in the distance, then tapped each of her fingers as if counting and shrugged.

Cree knew what she asked. “How long will I be gone?”

“I am not sure, a week for travel there and back, and however long it takes me to find out who is causing the chaos and fear with these unexplained abductions.”