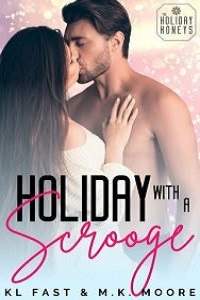 I hate Christmas and all of the commercial mess that comes with it. When my parents were alive there’d be a tree in all the public spaces, but I have trimmed that down to just one in the reception area. I had to. I couldn’t stand looking at them all.

The Snow Bird Inn is the place I’ve called home for the last thirty-three years. Three generations of Olsen men have been the proprietors of this forty-six-room boutique hotel, and I am just the latest. The season here dwindles more and more over the years and is one of the only hotels left in North Pole, New York, a small hamlet in Wilmington. Surrounded by the scenic Adirondack Mountains, we do have a pretty steady business in the winter. I wasn’t sure I wanted to run the Snow Bird, but hospitality is in my blood. I went to Syracuse University and graduated with a degree in hospitality management. When I was done, I brought back what I learned and turned it into the hotel that it is today.

We lose out to larger hotel chains in Wilmington proper and Lake Placid with their water slides and outdoor pools in summer. So, each and every winter has to count. It’s just my sister, Lacey, and I now. I am responsible for her and her education, and I take that very seriously. Our mom, Tanya, died four years ago in a train accident. Our father, Paul, died less than a week later of a broken heart. Technically, it was a heart attack, but I know he was beyond distraught when the love of his life died. All this happened when Lacey was just a freshman in high school. I finished raising her, and now she’s on her way to Stanford University in sunny California.

While she is obviously smart, we don’t qualify for federal aid, and the only scholarships she got is for books, room, and board. With Stanford costing upwards of fifty-thousand dollars a year, every red cent counts these days, and I’ve had to cull my staff down to the bare minimum. A couple of housekeepers, a chef, and a guest relations coordinator who doubles as the front desk clerk, speaking of, Elora Reeves has only worked here for three months, but I feel like I’ve known her forever. The moment she walked into my office; I was dumbfounded. Her dark curly hair was fanned around her face. Her porcelain skin was tinged pink from the crisp fall air, and her voice was breathy when she said my name for the first time. Even now, months later, just the thought of her saying my name makes my dick hard. I felt like a fucking teenager sitting behind my desk with a raging hard-on for a girl who can’t be more than twenty.

Within minutes of meeting her, I wanted her. In fact, I want her more than I have ever wanted anyone in my life. It’s all I can think about. Her work uniform consists of tight black pants and the Snow Bird button-up shirt in various colors. Claiming her should have been so easy, and it would have been if not for the fact that she has a boyfriend. A fucking boyfriend. A mere boy who will never be good enough for her had the sheer dumb luck to find her first. I hate him, this nameless, faceless piece of shit who gets to love her. It should be me, but fate has never been kind to me.

For weeks now, we’ve worked side by side, and there are times where it feels like she’s flirting back, but then nothing. Her professional veil comes back up, and I can do nothing but stare after her and adjust my dick, which has a mind of its own when it comes to her. Fuck, I haven’t even thought of another woman since before my parent’s died. I was laser-focused on getting Lacey through school and making the hotel all it can be. Elora brings out a side of me that I didn’t know I had. Animalistic is how I’d describe that. Despite knowing that she has a boyfriend, I'll do everything in my power to make her mine. It hasn’t worked. Yet. But it will. My hands clench when she’s nearby.

We are standing at the counter. I am pretending to be engrossed in something on it while she checks in the last reservation we have for the day.

We’re five days from Christmas, and there is not a decoration in sight. I haven’t decorated since my parents died and I don’t plan to again. You’d think I would, given we are the Snow Bird Inn and our busiest time of year is Christmas, but I don’t. Our main customer base is childless hipsters coming up for long weekends. I remember when I was a little kid, and my grandparents were still alive, the place would be full of families and children celebrating Christmas, but that hasn’t happened in so long, and I prefer it that way.