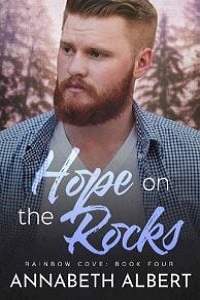 “You picked the wrong night to be bad at drinking,” I teased the sole patron sitting at my bar on the sleepiest of Monday nights.

“I’m not bad at drinking,” the cute doctor protested.

I still thought of him as new in town, but he’d lived here well over a year at this point. With all the newbie vibes he was giving off, he’d likely never planted his ass on a barstool prior to tonight.

“Yeah, you are.” I kept my voice light and friendly but honest. He wasn’t my personal doctor, but I’d seen him around the Rainbow Cove urgent care clinic on more than one occasion. He seemed like a good guy, always attentive and detail-oriented, with an easy smile. The kind who might not take too much offense at me being typically blunt. “You looked at my drink menu for a good ten minutes before you ordered a rum and Coke, no preference as to the rum. You drink like a college kid tiptoeing through the liquor aisle. And worse, you don’t particularly seem to like what you chose.”

“Not sure I like much of anything tonight.” His mouth twisted, none of his usual smile at all. And proving my point, he winced as he took another swallow.

“I can make you a drink you’d like.” In the decade I’d spent doing various bartending gigs, I’d learned there were a lot of problems I couldn’t do a damn thing about. But I could rescue people from awful beverage choices. “It offends my soul to watch you force yourself to drink that. If it’s a buzz you’re after, I can get you there in any number of tastier ways.”

“You’re rather confident.” The doctor tilted his head, considering.

It was a nice head, full of dark-brown hair a week or two past needing a trim, the sort of shaggy Hollywood stars paid good money to achieve. He was maybe five or six years older than me, making him mid-thirties, but his face was still boyish enough to get him carded if someone hadn’t ever seen him with his white coat and stethoscope. His slim build and shorter stature made him look younger too, and his hipster glasses and preppy polo made me think of a debate-team captain all grown up.

He licked at his lower lip, and heat bloomed in my gut. Attractive patrons were fairly common, but something about this particular hot nerd absolutely worked for me. My reaction to him made it even more of a pleasure to try to coax him into a better drink choice.

I put a little extra swagger into my grin and voice. “I’ve been accused of being cocky more than once. But I come by it honestly. I recently won a bartending contest in Portland for a new distillery. Ask Mason. I got some great new spirits for the menu, and it was awesome publicity for us here.”

“Can’t turn down publicity.” Shrugging, he glanced around the almost empty restaurant. Two couples were lingering over dessert at tables near the window. Outside, it was a dreary night, colder and wetter than the early June date might suggest. Tourist season was supposed to be in full swing, but business at our little LGBTQ+ welcoming establishment could be wildly unpredictable.

“What do you say? Let me show you my award-winning skills?” I winked at him, and his cheeks colored like he wasn’t used to casual flirtation, which was damn adorable.

“I guess you can make me something different.” He pushed his barely touched drink aside and pulled out his phone, all but waving me away.

But sadly for him and his plans to drink in peace, he was the best distraction I’d had all day. Flirting with him felt good on a level I didn’t want to overthink, but I also wasn’t about to blow my chance to impress him.

“Hey, no phone,” I said in a half-teasing, half-scolding tone. “You gotta answer some questions first.”

“Do I?” He pursed his mouth, but his curious eyes said he’d play along.

“Yep.” Leaning forward, I dropped my voice like we were sharing secrets. “Now, I know you like sweet things—”

“How do you know that?” Forehead wrinkling, he gave me a comical double-take.

“Doc, I have eyes.” I was used to being underestimated, and that was okay. People never appreciated how much I saw from behind the bar. And I’d definitely noticed the doctor the couple of times he’d been in, both on his own and with coworkers from the clinic. “Every time you come in, you order something with lots of green stuff. Healthy. But you look at that dessert menu like it’s the key to a new truck. And then you sigh and pay the tab without ordering anything from it. But you want to.”

I’d been tempted on more than one occasion to comp him a treat, but there was a line between flirty bartender and weirdo stalker that I tried not to cross. Much as my body loved sexy, smart nerds like the doctor, they tended to be a little out of my league. Besides, Mason, who owned the place along with me, Logan, and Curtis, had definite opinions about trying to pick up customers. So I didn’t, but that didn’t mean I hadn’t been acutely aware of every damn time the doctor came in.