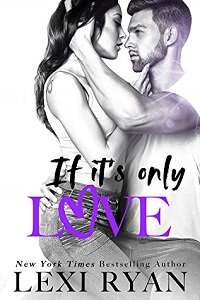 When I fell off my bike while racing down the street after my brothers, it was Easton who circled back to help me. Easton who took me inside, helped me clean the bits of gravel out of my knee, and then dabbed it with hydrogen peroxide. Easton who turned my tears into laughter by telling me about Carter’s inability to speak every time he saw his crush in class.

I decided right then that I was going to marry Easton. Because I was seven and didn’t understand the realities of romantic love. Because Easton hadn’t yet become the Easton Connor. Because I hadn’t hit puberty and become chubby Shay. Because I still believed in fairytales, I believed I would marry this boy with the light brown hair and blue-green eyes.

It was my secret. One I vowed to keep to myself until the time was right. Easton didn’t know my plans.

And I had no idea he’d break my heart.

“Shay!” Easton hoists a shot glass in the air and wriggles it in offering. “Tequila? What do you say?”

Carter spins on him and frowns. “What the fuck, man? Don’t give my little sister alcohol.”

“Shit, sorry,” Easton says, but his mischievous eyes are on me as he says, “I always forget she’s so young.”

The tequila must be going to his head, because there’s no other explanation for the way he’s looking at me. His eyes drop to my mouth, and warmth spreads through me. If I didn’t know better, I might think that . . . No. That doesn’t make sense. This is Easton. My friend now, sure, but East is everything. Girls everywhere are crazy about him—a football star on the brink of NFL fame, he could have any woman he wanted.

Carter grabs a beer and leaves the kitchen and pushes out the back door to join the party. And then it’s just me and Easton. Alone with a bottle of tequila and the full shot glass that’s still in his hand.

He flashes a glance over his shoulder toward the back door. “Does Carter have any idea that you’re not a little girl anymore?” he asks, closing the distance between us.

I bite my bottom lip. My skin flushes hot when he’s this close, and I swear he’s looking at my lips again. Do I have something on my face? Spaghetti sauce from dinner or something? I discreetly wipe my mouth with the cuff of my sweatshirt—or as discreetly as I can when he’s so close.

Easton grins, as if he knows he’s making me uncomfortable and likes it. “Have you ever done this before?”

A thousand possibilities fly through my mind at that question—most of them involving the hands and mouth of the man asking. “Done what?”

He lifts the shot glass and sniffs the tequila. “A snakebite. Salt, tequila, lime.”

I shrug. I’ve had alcohol before. My family isn’t exactly puritanical when it comes to alcohol. But I’ve never done a shot, and certainly never a snakebite. Whatever that is. “How do you do it?”

Grinning, he hands me the shot glass then grabs the salt shaker from the counter. He lifts my free hand to his mouth and licks the inside of my wrist. My breath whooshes out of me at the sensation of his hot tongue on my skin. I want to close my eyes, but he’s watching me, and I’m afraid he’ll laugh if he has any idea what affect he has on me.

Grinning, he sprinkles salt on the wet patch of skin before putting the shaker down and grabbing a wedge of lime from the counter behind me. “Lick the salt. Take the shot. Suck on the lime.”

His nostrils flare and his pupils dilate, turning those blue-green eyes dark. “I think I’d like to see you try.”

I don’t know how long I stand there trying to decide, but my skin tingles where he licked, and my mouth has gone dry.

“Want me to go first?” he asks, his voice a little husky.

He takes my wrist and brings it to his mouth, licking off the salt. Shocks of pleasure roll down my spine and settle into a riot of butterflies in my stomach. He doesn’t even take the shot glass from me, just wraps his hand around mine and leads the glass to his mouth so he can shoot it back. Then he pops the lime in his mouth and makes a goofy face at me as he sucks the juice.