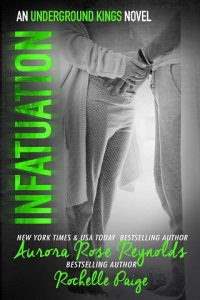 HEARING THE RATTLE of an old car and the sound of squeaky brakes, I press Pause on Call of Duty and get up from my couch to go to the window. I pull back the curtain just enough to see outside without drawing attention to myself.

It’s dark out, but the light from the street lamp in the middle of the parking lot has cast a glow on the car beneath it. The rusty, beat up, powder-blue Buick needed to go to the junkyard a few years ago. The bumper is barely hanging on by the ropes someone tied around it. The back right taillight is covered in red tape that is peeling away, and I know from seeing the car in daylight that there is more rust on the car than there is paint.

As the driver side door opens, my heart starts to pound franticly against my ribcage, the same thing it does every time I’m able to catch a glimpse of her. My neighbor, the cute little blonde who moved in with Shelly, a woman who lives in my building. I’ve never talked to her before, but I’ve watched her more than is probably healthy.

I watch her get out of the car and grimace when she tries to push the door closed and it doesn’t latch but swings right back open. “Jesus,” I hiss when she takes a step back and kicks the door with so much force that the car rocks from side to side. As she blows a piece of her long blonde hair out of her face, it flutters in the light as she stops to rests her hands on her very round stomach. She looks about seven months pregnant, if not more. Then again, it could just be her petite size making her look further along.

When she finally starts toward the building, I wonder for the millionth time what her story is and how she became friends with Shelly. She looks and dresses nothing like the other women Shelly hangs out with. I’ve never seen her wearing makeup, and her clothes… well, her clothes leave everything to the imagination. They’re baggy and do nothing to accentuate her figure.

As she gets closer, I notice the dark circles under her eyes and the exhaustion in her features. Every time I see her, she’s either coming from or going to work. Okay, I should say I think she’s going to and coming home from work. I’ve never actually spoken to her before, and she has no idea I even exist.

When she reaches her apartment door, she pauses and drops her chin to her chest. Even though she’s in profile, I can see the annoyance and deflation on her face as she places her hand on the doorknob. And as she pushes in, allowing the loud music to stream outside, a roomful of people can be seen.

Seeing that, my fists clench. The urge to protect her, to do something, has me moving to my computer. Twenty minutes later, I go to the window and smile as ten people along with Shelly leave the apartment when the police show up.

Having done my part to take care of whoever she is, I go to the couch, sit down, put my headphones back on, and start up Call of Duty once more.

HEADING FOR MY Rover the next morning, I look to the left when I hear, “You stupid piece of crap. Open. Up. Now!” I spot my neighbor pushing and tugging on her car door, trying to pry it open.

I walk across the lot toward her then stand back, tucking my hands into the front pockets of my jeans and trying not to laugh at how adorable she looks yelling at her car. “Need some help?” I finally ask, taking pity.

Startled, she jumps back and her head flies in my direction.

I pull in a shocked breath when her eyes meet mine. I knew she was going to be beautiful up close, but I didn’t realize how fucking gorgeous she is. Her blonde hair is up in some kind of bun on top of her head, drawing attention to her big blue eyes, soft, feminine face, and totally fucking kissable full lips.

“Um… no. No, thank you. I’ve got it.” She waves me off, putting one foot on the car next to the door and pulling harder than she was before.

Knowing she’s going to end up hurting herself, I get closer and remove her hand from the door handle. “Let me help,” I tell her gently.

“Seriously, I almost had it.”

I ignore her protest and move her out of the way then pull on the door, expecting it to open for me, but then feel like an ass when it doesn’t budge. Pulling it again with more force than before, I shake my head when nothing happens. How fucking hard did she kick it closed last night? “It’s stuck,” I mutter more to myself than her, and she giggles. Turning to see her face, I watch her lick her lips and I fight back a groan.