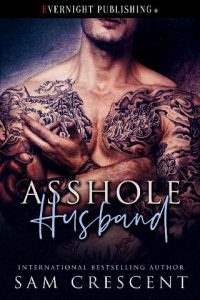 Rachel Parker, no, Rachel Montgomery smiled as she stared up at the ring. She couldn’t believe she was married. Yesterday had been the best day of her life. One she would never forget. Her husband, Wolfe Montgomery, was ten years her senior, but he’d been so kind, gentle, sweet, and tender.

She’d come to his bed a virgin last night, and now, she was … a woman.

It was so strange to be a married woman. It wasn’t yet morning, but the bed was empty. She put her hand out to touch where Wolfe should have been, but the sheets were cold. He must have left the room a while ago, but she’d not even felt him leave. She’d been so exhausted.

Getting to her feet, she wrapped the blanket around herself, until she spotted a robe. She tied the belt, covering her naked body and untucking her hair from the back of the robe. She opened the bedroom door and began to make her way downstairs toward the kitchen. Wolfe had been persistent in the reception being held in his home. He had a large, lavish home, more of a mansion than a house, but she didn’t mind. Her parents came from wealth that had been passed down by her grandparents. She had grown up with everything a young woman could ask for, apart from the one thing she always wanted, love.

It was a rather silly, naive notion of what she always wanted. Her two older sisters often teased her about what she wanted out of life and how ridiculous and childish it sounded. Love wasn’t accepted in their world. They married for money and power.

She’d defied the odds and married for love.

She couldn’t wait to start a family with him, and they had talked about doing so immediately so she hadn’t been taking her pill, nor had he worn a condom last night.

Thinking about last night made her ache. She wanted him again.

Walking downstairs, she marveled at how quiet his house was. She lived in a much older house with creaking staircases that made it impossible to go anywhere without someone noticing.

She saw a light coming from Wolfe’s office. When he gave her the tour a couple of weeks ago, he’d asked her not to just barge in, to always knock and wait as he often dealt with important business calls and didn’t wish to be distracted.

Stepping up to the room she was about to do that even though the door was partially ajar when she didn’t just hear her husband; no, another man.

“So, you’ve got the fortune you’ve been after and a wife out of it. Whatever next?” the man asked.

“I’ll keep Rachel happy. It’s not hard to do. Feed her a couple of lines and she’s like a fucking puppy dog in my hand.”

She frowned. In the past six months she’d never heard him speak like that before.

“Wow, tell me, Wolfe, do you love your wife or was this all about the money?”

The door was open enough to allow her to see Wolfe. He was leaning against his desk, and he wore a suit. His shirtsleeves were rolled up as he gripped the edge of the desk.

“Parker should have known not to mess with me. I told him the best way of securing his business venture was to give me a place on his board, and a percentage of his company. Denying me what I deserve, he should have known I’d find other methods. Marrying his daughter, well, it just got me closer to what I require.”

Rachel couldn’t believe what she was hearing.

“The oldest daughter is a slut. The middle one, she’s too … aware. Rachel, the youngest, well, she was the easiest target. All I had to do was say a few nice things and I had her. She even thought our meetings were fate, not carefully crafted by me just so I could make her fall in love with me.”

“I’ve got to say, Wolfe, I know you’re a monster in the boardroom, but marrying to get what you want, I was shocked.”

“Please, you’ve known me for years. Besides, business will take me away a lot of the time, and I can have my fun then. She was such a fucking sensitive virgin.” Wolfe groaned. “Anyway, she’ll do as she’s told, and we’ll all be happy.”

Rachel had heard enough. Stepping away from the door, she rushed back up to their bedroom.

Closing the door, she leaned against it, her heart racing.

He didn’t love her?

The man she’d known for the past six months would never treat her like that. She couldn’t believe it. He’d never said a curse word in front of her, and the way he talked just now, that wasn’t the man she knew.