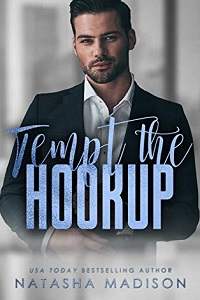 “This booze cruise is exactly what you need,” Jason, my roommate, tells me as he packs a small gray tote bag. “After those midterms, I need to be drunk for four straight days, and maybe, if I’m lucky, I’ll have hot sex.” I shake my head at him. He’s not lying when he says those midterms were bad. They were fucking brutal. I lived on pizza, coffee, and Red Bull for five days straight. But I had one goal and one goal only—to ace those fucking exams.

“We still need to be reasonable,” I say to Jason while I open my drawer and take out five folded white T-shirts. That’s me—reasonable Luca. Luca with the highest IQ; Luca who will graduate first in his law class from Harvard if things keep going the way they are going.

Jason groans from his side of the room. “Dude, if you fuck this up for me, I’m going to glue your ass cheeks together.” He points at me when a knock on my door has us looking over.

The door opens, and Nick and Tom walk in both carrying black backpacks. “What the fuck are you guys packing?” Tom comes over and sits on my bed. “You know that it’s four days, right? And we will be in shorts all day long.”

“Yeah,” Nick says, going over to my desk and sitting in my chair. Holding out his hand, he starts counting with his thumb. “You need a bathing suit, sunscreen, two pairs of shorts, and five T-shirts.” He then looks at the three of us and smiles so big. “Oh, and two boxes of condoms.” He holds up two fingers and twirls around in the chair.

“It’s not a swingers’ cruise,” I admonish, tossing a couple of pairs of socks into my bag. “You are aware of this, right?”

“It’s called a booze cruise for a reason,” Nick says, laughing. “You booze, you sleaze. It’s a circle of life.”

“Why?” I ask them, confused, while I pack a pair of dress pants, and all three of them look at me with their eyebrows pulled together.

“You never know if it’s going to get cold at night, or it’s fancy and shit,” I say. “Why do we need nicknames?”

“Oh my God,” Tom says, throwing his head back. “You can’t give your real name. What if you meet her, and it’s just a weekend thing?” he says with his hands. “Or she’s good enough for the cruise but not good enough for land?”

“Then you’ve got to be the asshole and be all like it’s not you, it’s me, but it’s really her and not you,” Tom says. “It’s just easier if we come up with code names.”

“We should have kick-ass nicknames like in Top Gun,” Nick says. “I’m Maverick.”

“I’m Ice Man,” Tom says, raising his hand and then pointing at me. “You’re Goose.”

“Why am I Goose?” I ask him, placing a dress shirt into my luggage. He comes over and tosses the dress shirt back out.

“That is why you’re Goose, always making sure we don’t fuck up or do anything stupid,” Tom says.

“Wait, didn’t Goose die?” I ask them, and they all look around, avoiding the question.

“Listen, the bottom line is you need to let loose for once. Take your hair down, or don’t fix your hair,” Nick says, winking at me. So I like to fix my hair every day and wear nice clothes. There’s nothing wrong with that.

“You mean be an adult? That has consequences,” I counter.

“He’s off the boat,” Tom says, looking at Jason and Nick who both nod their heads. “Sorry, dude, the tribe has spoken.”

“His name is cool, okay?” he says, slamming the carry-on bag he has. “Now I need to stop at CVS and get all the condoms.”

I shake my head. “We should also get aloe vera in case we get a sunburn.”

They all groan this time. “You know what?” I look at them. “Fuck you all. If you get a sunburn, don’t come crying to me.”

“Deal,” they all say, and we walk downstairs toward the front of the apartment building.

“This time tomorrow, we are going to be on the lido deck hopefully doing body shots,” Nick says, getting into the Uber we ordered. “And if you mention hygiene,” he says, leaning his head forward to look at me, “I’m throwing you overboard.”

I roll my eyes, looking out the window to take in the snow on the ground. I watch the buildings outside, and I had no idea that, that weekend would change everything. I had no idea that at the end of all this, I would leave half of myself on that boat.