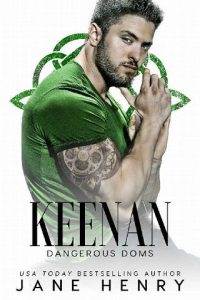 I watch from where I sit on the craggy cliffs of Ballyhock to the waves crashing on the beach. Strong. Powerful. Deadly. A combination so familiar to me it brings me comfort. It’s two hours before my alarm goes off, but when Seamus McCarthy calls a meeting, it doesn’t matter where you are or what you’re doing, the men of The Clan answer.

I suspect I know why he’s calling a meeting today, but I also know my father well enough not to presume. One of our largest shipments of illegal arms will arrive in our secured port next week, and over the next month, we’ll oversee distribution from the home that sits on the cliff behind me. Last week, we also sealed a multi-million-dollar deal that will put us in good stead until my father retires, when I assume the throne. But something isn’t right with our upcoming transactions. Then again, when dealing with the illicit trade we orchestrate, it rarely is. As a high-ranking man of The Clan, I’ve learned to pivot and react. My instincts are primed.

The sun rises in early May at precisely 5:52 a.m., and it’s rare I get to watch it. So this morning, in the small quiet interim before daybreak and our meeting, I came to the cliff’s edge. I’ve traveled the world for my family’s business, from the highest ranges of the Alps to the depths of the shores of the Dead Sea, the vast expanse of the Serengeti, and the top of the Eiffel Tower. But here, right here atop the cliffs of Ballyhock, paces from the door to my childhood home, overlooking the Irish Sea, is where I like to be. They say the souls of our ancestors pace these shores, and sometimes, early in the morning, I almost imagine I can see them, the beautiful, brutal Celts and Vikings, fearless and brave.

A brisk wind picks up, and I wrap my jacket closer to my body. I’ve put on my gym clothes to hit the workout room after our meeting if time permits. We’ll see. My father may have other ideas.

I hear footsteps approach before I see the owner.

Boner sits on the flat rock beside me, rests his arms on his bent knees, and takes a swig from a flask. Tall and lanky, his lean body never stills, even in sleep. Always tapping, rocking, moving from side to side, Boner has the energy of an eight-week-old golden retriever. My younger cousin, we’ve known each other since birth, both raised in The Clan. He’s like a brother to me.

“Eh, nothing,” I tell him, waving off an offer from the flask. “You out of your mind? He’ll knock you upside the head, and you know it.”

If my father catches him drinking this early in the day, when he’s got a full day of work ahead of him, heads will roll.

“Ah, that’s right,” he says, grinning at me and flashing perfect white teeth, his words exaggerated and barely intelligible. “You drink that energy shite before you go work on yer manly physique. And anyway, get off your high horse. Nolan’s more banjaxed than I am.”

I clench my jaw and grunt to myself. Fuck. Nolan, the youngest in The Clan and my baby brother, bewitched my mother with his blond hair and green eyes straight outta the womb. Shielded by my mother’s protective arms, the boy’s never felt my father’s belt nor mine, and it shows. I regret not making him toe the line more when he was younger.

“Course he is,” I mutter. “Both of you ought to know better.”

“Ah, come off it, Keenan,” Boner says good-naturedly. “You know better than I the Irish do best with a bit of drink no matter the time of day.”

I can toss them back with the best of them, but there’s a time and place to get plastered, and minutes before we find out the latest update of the status of our very livelihood, isn’t it. I get to my feet, scowling. “Let’s go.”

Though he’s my cousin, and I’m only a little older than I am, Boner nods and gets to his feet. As heir to the throne and Clan Captain, I’m above him in rank. He and the others defer to me.

He mutters something that sounds a lot like “needs to get laid” under his breath as we walk up the stone pathway to the house.

“Say it to my face, motherfucker,” I suggest good-naturedly. He’s a pain in the arse, but I love the son of a bitch.

“I said,” he says loudly. “You need to get fuckin’ laid. How long’s it been since the bitch left you?”

I feel my eyes narrow as we continue to walk to the house. “Left me? You know’s well as I do, I broke up with her.” I won’t even say her name. She’s dead to me. I can abide many things, but lying and cheating are two things I won’t.