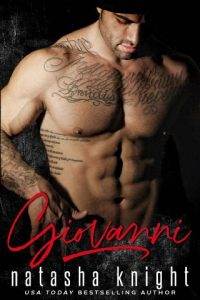 I can sleep. It’s strange, but I can always sleep. I learned it on that grimy basement floor four years ago.

The past has a way of creeping up on you.

I don’t know if mine will ever be finished with me. I thought it would. I thought it had. I thought the night I crawled out of that window and away from that house, that I had beat it. That I had somehow survived.

But the thing with surviving is you have to keep doing it. Every. Single. Day. You never beat the thing that breaks you, not really. It owns you. It’s always with you, no matter what. It becomes a part of you. Like skin. Like broken skin.

The night Giovanni Santa Maria stalked into my life, I knew it was happening again. My life on repeat. The past reappearing.

Sunshine. That’s what he calls me.

I’m anything but, though.

He’s a powerful man. A ruthless one. One more dangerous than any I’ve battled before. But I will battle. It’s in my nature.

Just as it’s in his to win.

He’ll take my body. He already has.

But I fucked up and he saw inside my soul, and now, he wants that too.

He likes to watch me. Likes to pull me apart and see the damage inside. I know men like him. They like the chase. They want you to run. To fight. It gets them off.

He’s wrong if he thinks he can break me, though. I’m already broken and the thing with survivors is we have nothing to lose.

And I’ll give him the fight of his life before I let him steal my soul.

I love living in the city, but parking is pretty much always a pain in the ass.

The rain has tapered off, leaving that sticky, steamy humidity behind. It would almost be better if it wouldn’t rain, but this July has been stifling.

I climb the stairs up to the outer door of the townhouse and shake out my ring of keys as I balance two grocery bags and my large tote. There are six apartments in this building, one on each floor. I’m lucky to have the top floor because it comes with a rooftop terrace. I just have to remember that it makes up for the six flights of stairs I have to climb daily. Although I hate going to the gym, so this is usually my excuse not to.

It’s almost nine at night. I’m later than usual. The light goes on as soon as I step on the sixth-floor landing. It’s the motion detector, and for some reason, tonight, it makes me jump. Then again, I’ve been jumpy all day.

My heels click on the hardwood floor as I make my way to my apartment. It’s just my door and one other on this floor, a janitor’s closet. Looking over the top of the bags I’m holding, I find the right key and slip it into the lock, hear the click, and feel the familiar weight of the lock turning. That’s usually enough to reassure me. To tell me I’m safe. But tonight, it’s not, and when I push the door open, it takes me a moment to register that a light is on. The reading lamp over the armchair. It casts a soft glow and is my favorite place to sit.

Except tonight, someone is already sitting in it.

My heart races. Still holding the stupid bags, I look at the huge man in my chair. He’s looking at me, and he’s incredibly relaxed. Almost smiling, even. He’s beautiful, disarmingly so, and impeccably dressed in a black suit. The light bounces off the gold of his cuff links as he brings his glass to his lips.

I take a step back. The overhead lights go on, and I bump into someone behind me. I turn. Another man, also in a dark suit. He’s big too, but he doesn’t quite look at me. Just makes sure I know I won’t be leaving just yet.

“Hope you don’t mind that I helped myself to a drink,” says the man in the chair. His voice is a deep timbre.

I’m not looking at him. I’m counting the others, three that I can see, standing in various places throughout my apartment. All are well dressed. All looking somewhere in my direction but not quite at me. None but the one in the chair, that is. And his gaze penetrates to my very marrow.

The door clicks closed behind me. I turn my head to look and see one of the suits blocking it, his hands folded in front of him. He’s a soldier. I recognize soldiers. There’s something in their stance, in the look in their eyes. And these guys are high-level. Whoever the man in my chair is, he’s important.