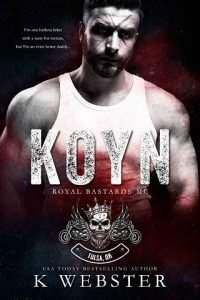 “I haven’t seen your scrawny ass in a year,” Jeremy growls. “A whole goddamn year.”

Again with the guilt trip.

“It’s just this contract I have with the NSA. It’s huge. I can’t up and leave to eat fucking turkey with you because you miss me.”

His heavy sigh rattles through the speakers of my Escalade. “You missed last Thanksgiving.”

“Did you call me to pout because I already have enough of that going on with Blaire right now?”

“D.C. class trip she insists on going on.”

“Long way from Houston,” he says with a whistle. “She’d actually have to leave the bubble.”

“Which is exactly why I said no.”

“And what did Ellie have to say?”

“That I’m being an overbearing asshole and if I don’t let Blaire leave the nest some, she’ll leave me for good.” I rub at the back of my neck as I pull in front of the gate of my massive house. “She’s seventeen, for fuck’s sake. I have a death grip on her at least until May when she graduates.”

“And now we get to the crux of the matter. Boys. One day some fool is going to deflower your daughter. You know this, right? She can’t die a virgin.”

I roll down my window and type in the code to give me access past the gate. “I’m going to sure as hell try and make that happen. She’s my little girl, man.”

“Well, at least bring my niece and sister-in-law up here to see me. T-Town is lonely without my little bro. I’m not above begging.”

“I’ll try,” I tell him and mean it. “I’m at the house. Ellie texted earlier. She’s making some low carb eggplant shit. I might be dead before Thanksgiving.”

He snorts. “The things we do for love.”

“You’re calling it love now? You and Krista back together?”

“Blake needs a mom and dad.”

“He’s eight. Practically a man now. You don’t really have to sacrifice your happiness to make your son happy,” I remind him for the millionth time as I pull into one of the four garage bays.

“He just seems happier when we’re all together. I can put up with Krista’s cunty ways for my boy.”

I roll my eyes. For how long, though? Until she fucks another one of his colleagues?

“You’re a saint.” I shut off the Escalade and climb out, grabbing my messenger bag. After dinner, I have more shit to work on. This contract will make me millions. “I need to kiss my wife and eat eggplant shit. I’ll call you when we’re on our way.”

“You’re going to come?” He fucking shrieks like a goddamn female.

“I’ll probably work the whole time, but yeah, we’ll come for the holidays.”

I hang up and pocket my phone in my slacks before shouldering my bag. My mind is on Blaire and how I’ll make it up to her for not saying yes to the class trip. She’s had her eye on a new Mustang. When I step into the house, I ready myself for the assaulting scent of eggplant. The smell that hits me confuses me, though.

“Ellz Bellz, babe,” I call out, trying to ignore the oily feeling spreading through my veins threatening to drown me. “Did we change our mind about dinner?”

The kitchen is empty. Food is spread out all over the counter where she was in the middle of prepping dinner. My heart rate speeds up. I toss my laptop on the table and stride out of the kitchen toward the living room.

“Blaire, sweetheart, where’s your mother—” My words are sliced right from my tongue as I take in the scene, blinking my eyes several times in confusion.

And then panic hits.

Blaire and Ellie, sitting on their knees, their wrists bound behind their backs, tears soaking their red faces. Both wearing matching strips of duct tape over their mouths. Not thinking about anything but their safety, I rush to them. My fingers brush along my wife’s wet cheek before something hits me hard in the head.

I blink away my unconsciousness, trying to make sense of where I’m at or what’s happening.

“And so he finally wakes,” a gruff voice says, stomping over to me.

He grips my hair and jerks my head back. I stare into a pair of cruel blue eyes. The bearded man has long, greasy blond hair and a wiry beard. His breath reeks of alcohol and rotting teeth.

He pistol-whips me and I nearly black out again. What the fuck is happening? I try to take a swing at the guy, but my hands are tightly tied behind my back.

“Your wife doesn’t belong to you anymore,” the man growls. “She’s my property. My prize for a job well done.”

“Y-You want money?” I hiss out. “You can have it. Name your price and it’s yours. Just leave them alone. Don’t hurt them.”