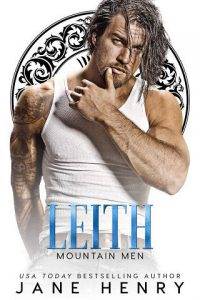 Snow falls heavily as I lift my ax and swing it, but I welcome the way the wet, icy flakes cool my body. Every stroke of the ax makes my muscles ache, and I’m damn near blinded by the snow, but I don’t bloody care.

This is where I find myself. Other men might lift weights and run on a treadmill that goes nowhere, but I’d rather work in the great outdoors on a day like today to keep myself in peak physical shape. The Captain of the Clan is meant to garner respect, and enforce the laws of our men when necessary. So, I train. I run the mountainous terrain, chop wood on our vast, wooded property, and spend as much time outdoors working the land as I can.

It’s quiet in the woods, the snow insulating us against both cold and noise. I swing the ax again, my anger at the meeting we had this morning forcing my ax with greater gusto than before.

Imagining that somehow I can exorcise my demons with my aching muscles and the cut of the blade. It doesn’t work, though. It never does. Still, I try.

My final blow splits the log in two, the blade sinking into the stump with an air of finality. I’m heaving with the effort, panting and sweating as I take a moment to admire the clean, fresh cut of the ax, the smell of the freshly cut pine, before I resume my work.

“Leith!” Paisley’s high voice is quickly drowned out by the wind, but I heard her clear enough. I turn, still panting, to see her standing in the doorway to the back entrance of our lodge. My youngest sister’s just turned seventeen, on the cusp of womanhood, the roundness of youth fading with every day that passes. Soon, she’ll be wanting to leave our reclusive home in the mountains.

I sigh. I haven’t been out here long enough, haven’t even touched the anger that boils within me, the fury that lies in wait like a prowling mountain lion. I can feel it fueling me even now. “Aye?”

She rolls her eyes. “Really, Leith. It’s fucking snowing out and you’re bare-chested like you’re ready to sunbathe on the beach?”

I lean on my ax and give her a withering look. “It’s hot swinging that ax, and you’d better watch that smart mouth of yours before Dad hears you swearing. I’d better not hear it again myself.”

She opens her mouth to protest, then thinks better of it. “I don’t understand why you boys swear like damn convicts, but God help the Cowen woman who curses,” she mutters.

I don’t bother explaining the double standard, or how it swings both ways. The girls may not be able to curse like we do, but on the flip side, they haven’t been held to the brutal standards of our upbringing either. If I rolled my eyes at my father like she does, I’d get the back of his hand across my mouth, even at the age of thirty. Even as the highest-ranking member of the Cowen Clan. I’m technically even above him in rank, but once a Captain always a Captain.

“Did you come out here to tell me how to dress, or tell me something of actual importance?” I start to turn away from her to grab my ax again, tired of her nonsense already.

“Dad wants you, and he said be quick about it.”

I bury my ax in the earth, snag my shirt from a nearby low-hanging branch, and head back inside.

Bram Cowen may have retired and appointed me Clan Captain, but he’s still my father.

I kick snow off my boots as I enter the house, and Paisley frowns.

“Don’t really understand why you chop the wood, Leith. We’ve staff to do chores like that, and you know it. Why do you bother?”

“For the same reason Mum cooks dinner once a week, even though she doesn’t need to either.”

Paisley still frowns but doesn’t reply. If she doesn’t understand the correlation, she has more growing up to do than I thought.

“Good afternoon, Mr. Cowen,” Mary says, stirring a large pot of soup on the stove. “Are you wanting dinner, sir?”

She’s one of several staff that runs both the mountain lodge where my parents reside and our Clan meets, as well as the chalets that decorate the outskirts of our home. Last year, my family ventured all the way south to pay the Irish a visit, to save Mary from a heap of trouble. They’re our allies, one of the few Clans who’ve got our backs. She’s been even more loyal and dedicated to us ever since.

It’s warm in here and smells strongly of Scotch broth and freshly-baked bread, but I’m not hungry. My mind is too occupied with what we discussed this morning, and moreover what my father’s called me in for.