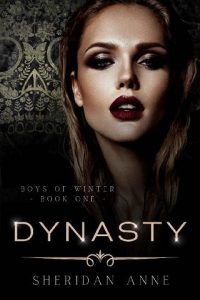 A thrill pulses deep inside of me, steadily growing and rising to the surface as I run my thumb over the gold-coated brass knuckles that rest comfortably over my fingers. Above each of my knuckles, the chunky metal is masked as four beautifully wicked rings, allowing me to get away with murder. It’s my best kept secret and yet my worst.

My thumb skims over the black gemstone and circles the skull that sits just above my first knuckle, knowing damn well that this pretty skull is going to be engraved into this fucker’s face for the next week and a half.

The adrenaline burns within me like a scorching fire, ready to fuck up everything in its path. I can’t wait.

I spin on my heel, my black thigh-high boots making the task harder than it needs to be, but after a few years of practice in these bad boys, I have it down to a fine art.

I take in the man who stands before me, looking at me like his next non-consensual meal. I slowly run my tongue over my deep plum lips, watching how he tracks my every little movement. “Hey baby,” he says, positioning himself right in front of me and putting on a show for his drunk friends. One even going as far as to rub his hands together like the pervy creep that he is.

I wonder what they would do if they knew I was only seventeen. Some might pull away in horror, while others would get off on it.

My show-stopping grin splits across my face, and I watch as he becomes suspicious. His eyes narrow, and he hesitates for just a moment. Guys like this don’t expect a woman to play along; they live off their fear. He wants me to run. He wants me panicked and fretting because a chick who doesn’t fight back is one hell of an easy target, and this guy, he’s fucking with the wrong girl. I’ve never been an easy target and I’m sure as hell not about to start.

I’m not the girl who runs; I’m the one who hangs around to see how many heads I can make roll. I’m the girl who seeks it out. I’m that bitch. The one who guys like this need to watch out for.

I reach out and run my fingers from his shoulder across his chest as his eyes widen a fraction. Right about now, he’s assuming this will be the easiest conquest of his life. “Hey to you too,” I murmur in a purr, my eyes becoming hooded, letting him know that he can have whatever the fuck he wants … at least that’s what I’ll let him think.

His hand falls to my exposed waist, pulling me in hard against his sweaty body, making me want to gag. I knew I shouldn’t have worn a cropped tank tonight, but I couldn’t resist. Leather, latex, chokers, and cropped shirts are my jam, add a deep plum lipstick and a high pony, and I’m down for anything. “What’s a pretty girl like you doing out so late in a place like this?”

“Oh, you know girls like me,” I say with a sickeningly flirty laugh as I walk my fingers up his chest, his eyes becoming more and more hooded by the second, his sleazy friends watching on with deep interest. I quickly glance their way, throwing a seductive smile at each of them, counting them as I go. “We’re always down for a little bit of trouble.”

Five altogether. This is going to be interesting.

My comment has his four friends moving in with excited smiles. Every single one of them assumes that they’ve hit the lottery and are about to get their dicks wet, but they’ve got another thing coming. I’m itching to feel flesh beneath my fist, and these fuckers just became my next high.

“What do you say?” One dickhead says, coming right up behind me and squishing me between himself and the guy who still holds my waist. He grinds his dick against the leather of my pants making me want to hurl. “Wanna go for a ride? I bet a girl like you could handle five guys. I swear, we’ll take it easy on you, but sometimes I just can’t help myself—I like it rough.”

“Mmmm,” I moan, tilting my head back toward him, my eyes flashing up to his with interest. “Sounds like fun. You know, I’ve never taken on five guys at once, but I guess there’s always a first for everything.”

A sick excitement flashes in his eyes, but before he gets a chance to say another word, my elbow slams back into his stomach. I twist in his arms, before bringing my knee up into his balls. He’s down on the ground before the others have even flinched into action.