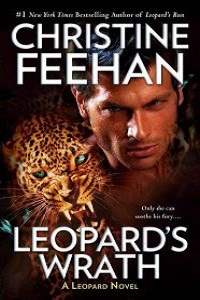 MITYA Amurov stared out at the drops of rain running down the window. The town car had tinted glass, adding to the darkness, but it was more his sullen mood that kept him from seeing anything but the endless rain. His body hurt all the time. The bullets had torn into him; not only him, but his leopard as well, nearly killing both of them. He wished they had succeeded.

It wasn’t the first time he’d been shot, but the experience had left him doing physical therapy and working out harder than ever to recover—for what, he didn’t know. His leopard, always cruel, always clawing for freedom, had become nearly impossible to control. Or it was possible Mitya was just plain tired out from fighting every day of his life to keep his leopard under control. He honestly didn’t know or care which it was. He’d gone past the time of hope for any kind of life.

He knew what he was. He’d known from the time he was born, and his leopard had made him aware of what was in store for him. He’d grown up a criminal. A man who hurt others. A man who destroyed the lives of others. A man who killed. That was who and what he was, and no matter how hard he tried to climb out of that world of blood and treachery, there was no getting out. Never. He didn’t have much to live for.

His leopard leapt for the surface, clawing and raking, trying to take him over. As Mitya fought back to stay in control, he thought the cat had responded to his morose thoughts. But then the leopard swung around so abruptly, Mitya’s body did as well. He saw headlights beaming from the side of the road.

His driver instantly hit the brakes. Ahead of them, the car in front did the same. The one behind them did as well.

“Turn around and go back to that car, the one on the side of the road.”

They were on a fairly deserted road, one that led to the country home where he resided. It was in the hills above San Antonio, a beautiful estate where he could run his leopard without too much fear of accidentally running into a human being.

“Mitya,” Sevastyan cautioned. “What are you doing?” He turned his head to stare out into the darkness at the car. Headlights prevented any of them from actually seeing and identifying the vehicle. His hand slid to his gun, and he sent a quick hand signal to the others in the car to do the same and then spoke into his radio to ensure the other two cars filled with security were ready for anything.

Mitya didn’t answer, but the moment the car was parallel with the parked one, he opened his door before Sevastyan, his cousin and bodyguard, could stop him. A woman stood beside the rear of the car, one hand on a tire. The rain poured down on her, but she stood unbending in it, watching him come to her.

The closer he got to the woman, the crazier his leopard acted. Mitya was no longer a young man. Midthirties had caught up with him and he had lived a thousand lifetimes in each of those years, all of them with his leopard, and he didn’t recognize this behavior. The cat was still clawing at him, still trying for supremacy, but not in his usual aggressive, “out for blood and mayhem and the taste of human flesh” manner. No, this time he felt almost playful.

Playful? His leopard? There was no time; even in childhood, his leopard had never felt playful. They had a relationship, a tight one, and his leopard guarded him as carefully as Mitya watched over his leopard, but that hadn’t ever included play.

He was vaguely aware of his bodyguards rushing to surround him, of the furious set to Sevastyan’s shoulders that indicated Mitya was in for another one of his cousin’s lectures, but he didn’t care. He was too busy drinking in the sight of the woman standing there in the rain.

She was on the small side, not at all one of the many tall, svelte models he often fantasized about. He wouldn’t be doing that ever again. She wore a suit, a flared skirt that showed off her shapely legs and a short jacket that seemed to shape her waist, ribs and the curve of her breasts to perfection. All white. Not off-color or ivory, but actual white. The buttons were startling in that they were dark and shaped into cars. They made one want to look closer—which he found he didn’t mind doing in the least.

She looked vaguely familiar to him, but he knew if he’d ever met her, he would have remembered her. As he got closer to her, he realized the skirt and jacket had images of cars pressed into the material, so the fabric looked embossed. Her boots were the same dark color as the unusual buttons.