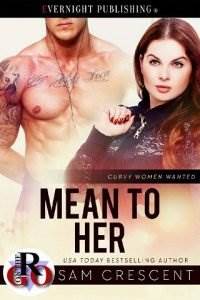 Staring down at the piece of paper asking if she wanted to go out with him was the final straw.

For the past three years, she’d had to deal with his constant taunts, name-calling, shoving her books to the floor, and just being a dick. She didn’t understand it. He’d always been nice to her before. Opening doors, helping her with her books. Overnight, he’d turned into a giant jackass. One she couldn’t stand to be near.

Sure, she was bigger than most girls, but rather than be embarrassed, she’d embraced her curves. There was no problem with having a bigger ass and tits than everyone else. The bullying sucked, but one day, she wasn’t going to be in high school, so it wasn’t like it mattered either. This would all be behind her.

Blake, though, he made senior year confusing.

Just last week, he’d dropped her books and had everyone laughing at her. She was pretty sure he’d checked out her ass as she’d bent down.

With the crumpled piece of paper in her hand, she marched through the school, heading toward the cafeteria. She never ate here, preferring the sunny outdoors or the library.

Once inside, she found Blake sitting in the corner with his other friends. A lot of girls hung out at the tables, and she, for one, was sick of him, of all of this. Even as her heart pounded, she wanted to end this crap one way or another. After storming up to him, she threw her palm down on the table, silencing everyone seated there.

Blake turned with that classic smile of his. “Do we?”

“Yes. Now.” She had his attention and she showed him the letter.

His brow rose. “I believe you just need to mark the boxes. Yes or no.”

“Are you serious right now?”

“You know what, fine.” She took the pen from his pocket, put the piece of paper down, and marked the no box. “If that’s what you want to do, fine. I don’t care anymore.” She left the piece of paper along with the pen and walked out of the cafeteria.

What was his problem?

One moment he was mean to her, the next he expected what? To go out. To be boyfriend and girlfriend.

Gripping her shoulders, she made her way to her locker, but as she was about to reach in to grab her lunch, she was pulled around.

“You wanted an answer. There’s your answer.” She shrugged. “Take it or leave it.” She was done playing these games with him.

“Do you even hear yourself or do words literally fall right out of your mouth without a care in the world?” She folded her arms across her chest. “You asked for an answer. I gave it. I don’t care who you are. Yes, you’re the most popular guy in school and every other girl wants to go out with you, but guess what, I’m not them, so I don’t want to.”

“Why not? I’ve never sent a girl a letter asking her to go out with me.”

“I honestly don’t know if you’re kidding right now or if this really isn’t a joke to you.”

“I’m asking. I expected your answer to be yes.”

She burst out laughing. “Blake, you’ve been nothing but mean to me for the past couple of years. Three to be exact, but hey, clearly, you’re not counting. You can’t expect me to want to go out with someone who’s mean and cruel.”

“Look, I was only being those things because I wanted you to go out with me.”

“Yeah, you’re the sexiest girl in school and one day, I just, I didn’t want anyone else to go out with you, so I figured if I made you enemy number one, I’d get you all to myself.”

She shook her head. “I’ve heard enough. This is complete crap. You don’t get to bully a girl and then in the next breath ask her out.”

“Not happening, Blake. My God. What’s the joke? Because I don’t find this at all funny. Messing with people’s lives isn’t funny. We’re so done talking about this.” She grabbed her bag, slammed her locker closed, and left.

There, that wasn’t so bad. Blake needed to know she wasn’t joking anymore. This with him, the fight, it was over. She was never going to go out with him.

“Just so you know, Hagen,” he said, calling after her, using her last name. “You’re going to be mine. You just don’t know it yet.” He winked at her.

Hiking her bag up her shoulder, she made her way to the library. The only place in the world that would help her calm down was her library, filled with all the amazing books she wanted to read.