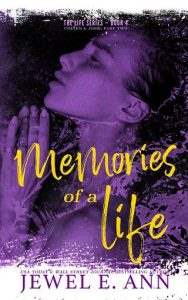 The girl I met when we were nine is now the woman who said “yes” to being my wife.

But Josie’s not planning our wedding; she’s too consumed by things that happened over a century ago.

She has terrible dreams and unrelenting visions of the unspeakable. I believe her, but I don’t understand her.

If I can’t understand her, I can’t stop her.

And without us … well, I can’t imagine that world.

“Colten messages me hourly. Does he really think I want to know what he had for lunch? Does he need to know our dinner plans at ten in the morning? Do I care that a friend of a friend is pregnant with triplets?”

Dr. Byrd rests an ankle on his opposing knee, wearing an expression of deep thought.

I continue, “He bought new black boots for work. His mom is taking water aerobics. A funny TikTok. Detective Rains has a hangnail.” I roll my eyes. “Okay, not that one, but nearly as ridiculous. He sends all these messages when what he really wants to say is, ‘Are you doing okay? Have you thought about that girl, the one you think you were? Have you made an appointment with your psychiatrist? Are you still planning on marrying me? Have you told anyone else about your theory?’”

“Listen … it’s not a theory. I haven’t been wrong once since the day I woke from my near-death experience. I want to be wrong. This isn’t the kind of ‘right’ anyone would find satisfying. But no, I haven’t told anyone except the Nashville police. If I didn’t have the credentials that I do, there’s little doubt that I would have been committed by now.”

“Do you believe in reincarnation?” he asks.

“I think I’ve reached the point of ‘if it walks like a duck and talks like a duck.’ Tomorrow the clouds could part and angels could descend from heaven. If that happens, even the most headstrong atheists will take a moment to rethink their beliefs. So … yeah. I’m inclined to believe in reincarnation since I have such inexplicable things in my head from a time way before the existence of Josephine Watts from Des Moines, Iowa.”

“Tell me about the girl.”

“The one I was in another life?”

I shake my head. “I don’t know. I just remember the feeling. Feeling scared. Feeling the edge of the straight blade against my scalp. It cut me. He told me to hold still.”

“I don’t know. I just want to know if you’re sure it was him or if you might be deducing it from the information you’ve gathered online coupled with the visions in your head.”

“Two weeks.” I blow out a long breath. “I need work. I need my mind to find its place again.”

“And the engagement? Are you making wedding plans?”

“Because …” I shake my head. “I don’t know if I can be that girl he murdered and be a bridezilla.”

“Has Colten told his family?”

“You haven’t asked him?”

“He’s … I don’t know. He’s okay, yet not okay. Colten and I have always danced around the truth. For as long as I can remember, we’ve made our own reality. We’ve had front row seats to watching the rest of the world and acting like it doesn’t affect us if we don’t let it.”

“How has that worked for you?”

We wind up our session with me feeling none the better. If I’m not going to let him medicate me, he’s helpless. I don’t think patients with near-death experiences comprise a large percentage of his clientele.

When I get home, I scroll through my emails to find the parapsychologist in Berkeley. I missed my appointment. It’s time to reschedule.

Colten’s mom refused to let him watch the news. She wanted to protect him and his brother from such evil. We were twelve, so it wasn’t out of line with good parenting.

“Let’s talk about this,” Dad said to me a few nights after the horrific massacre. He and Mom sat me down at the kitchen table, and we discussed the events. It’s not that my parents weren’t “good” parents; they just had a different definition of good parenting.