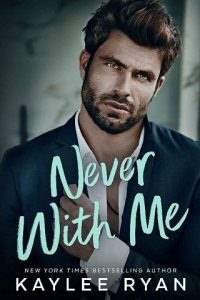 I refuse to let the tears fall. Not this time.

I stare at the bruises that surround my wrist. It’s easy to make out the fingerprints. I’d show them to my father, but I know it won’t matter. He’s created the same type of bruise multiple times. Besides, he’s just told me that I’m to marry the man responsible for my new markings.

My father doesn’t care that the man hurts me or that he has a different woman warm his bed every night. All he cares about is binding our families together. He doesn’t care about what I want. He never has. I’ve spent my life living under his thumb.

I can’t take it anymore.

For the first time in my life, I’m going to defy him. I’m scared of the repercussion of doing so, but I’m even more scared to spend my life married to a monster.

“No.” My voice is flat and void of any emotion. I learned a long time ago that showing him anything other than obediance isn’t tolerated. I don’t let him see that his demand has cut me to the quick and that my heart will be forever broken from the man who was supposed to love me unconditionally. Protect me.

“What did you just say?” Anger ramps up in his voice.

Slowly, I lift my head and stare my father in the eye. “I said no.”

His nostrils flare, and if it were possible, he’d have smoke coming out of his ears. In all of my twenty years of my life, I’ve never uttered the word no to the man until just now. The look on his face and the way he’s clenching and unclenching his fists tells me he’s not the least bit impressed. Not that I expected him to be.

My entire life, he’s dictated my every move. What I wear, who I’m friends with, and who I date. Currently, it’s Robert Barrington, the third, my current boyfriend, and son of my father’s business partner. We’ve been dating since high school, if you want to call it that. Robert does what he wants and keeps me around for when he needs to put on a show. I’m well aware that he’s cheated on me multiple times. In fact, it’s a daily occurrence. It doesn’t bother me. In fact, it’s a relief that he’s finding it somewhere else.

“You will do as I say,” my father spits.

“No.” I’m calm on the outside, but my insides are shaking. Rage appears in his eyes, his voice, and he scares me. They both do. I glance out of the corner of my eye and see my mother sitting on the wingback chair sipping her wine. I didn’t have to see her take them to know that she’s also taken anti-anxiety medication that I’m sure she washed down with said wine.

My mother is weak. She bows down to my father like the good little trophy wife she is, and it makes me sick. I’ve begged her more times than I can count to leave him. We can run away together and live a happy life, but she refuses. She claims she loves him and she’s nothing without him. He’s brainwashed her, and it breaks my heart, but at this point in my life, I have to learn to stand up for myself. I refuse to become another version of my mother.

I turn my head when she opens her mouth, thinking she’s going to defend me, but instead, it quickly closes as she stands and walks out of the room- turning a blind eye as usual. I watch her leave, which is a mistake. That’s why I don’t see it coming.

My father's open palm as it lands with a loud clap across my cheek.

Pain explodes across my face. He’s spouting his hateful words and threats, and it takes everything in me to remain standing. To not let him see how he’s tearing me down. After a few moments I come back to the present, and he’s still spewing hate.

“You will marry Robert, and that’s final.”

He scoffs. “Do this, or you are dead to me.” His gray eyes stare me down with nothing but hatred.

I wait for the pain to increase, like a knife buried in my chest, but it never comes. I’m immune to his threats of cutting me off. And his words “being dead to him?” I’ve heard them since I was little. He’s manipulative and cold, and every day I lose a piece of myself living under his control.

I’ve had enough. I’d rather be dead to him than to keep living this way. “I won’t marry him.”

“Leave.” His voice is low and commanding. “You take nothing with you. Do you understand me, Ramsey? You’re dead to me. Leave.” He turns and walks to the small bar and pours himself three fingers of whiskey.