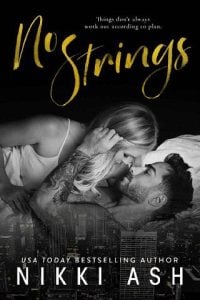 Let You Love Me- Rita Ora

“Brody’s been kicked out of school and refuses to listen to me. I can’t do this anymore.”

The mother of my son glares my way, but I’m unfazed. I’ve been on the receiving end of her wrath for the past fifteen years.

“You’ve been traveling since he was born. It’s easy to play dad from afar, but you haven’t actually been here. He’s been getting into fights and failing his classes. Now he’s been expelled.” Her tear-filled eyes lock with mine, pleading. “He needs his father.”

Her words hit me like a punch to the gut. I didn’t ask to become a father and never wanted to become one. I watched what having kids did to our parents. Listened to their constant arguing over finances and parenting until our mom, someone who was supposed to love and protect us, had finally had enough and did the unthinkable, leaving us all to drown in our guilt and grief.

I never wanted that for myself or my kids. I didn’t want the responsibility that came with parenting, and I didn’t want my kids to ever be put in the position my sister and I were in, which is why I made it clear to Paola I didn’t want to have any. She promised she understood and swore she was on birth control. But she lied. She went behind my back and got pregnant, thinking that I’d magically change my tune. The only thing that changed when she told me she was pregnant was our relationship status. I walked away that day, losing any trust and respect I had for her.

It took some time for me to come around, but I went to the hospital when Paola called me the day Brody was born, planning to give up my rights. This wasn’t an accident. She did this on purpose. But the second I looked at my son, my heart swelled with a kind of love I had never felt, and despite my disdain for his mother, I became a father that day and promised Brody I would do whatever it took to be there for him.

Her accusation knocks me out of my thoughts.

“Yeah, I’ve been busy working. You know, to pay your child support and the private school our son was attending. I had no idea he was getting into trouble because you never said anything.” She could’ve called, texted, emailed. I spent part of Christmas break with Brody, and neither of them said anything. Yeah, he seemed moodier than usual, but I figured it was just a part of him being a teenager.

“It’s only gotten worse as of lately. It’s like one minute, he was a sweet little boy, and the next, he’s skipping school and getting into fights. Please, Benjamin. I need you to take him. I… I can’t do this.” Tears leak from her eyelids, sliding down her cheeks, and I’m reminded of my mother. Of the last time I saw her alive…

“I want to watch the TV!” my sister, Amalia, yells.

“It’s my turn!” I shout back, snatching the controller from her.

“Both of you shut up!” Mom screams, tears streaming down her cheeks. “I can’t handle all the fighting. Get in your rooms now!”

We both groan but do as she says, not wanting to upset her more.

A few hours later, I’m playing my PlayStation when Amalia comes running into my room. “Hey! Get out!”

“Benjamin,” she sobs. “Mom…” She drops in front of me, covered in… is that blood?

“Benjamin,” Paola says, bringing me back to the present. Her eyes are rimmed red, and her nose is running from crying. Her cheeks are splotchy and tearstained. A part of the reason I stayed away from Paola was so what happened between my parents would never happen to us. If I wasn’t around, we couldn’t fight. Yet somehow, here we are…

“Okay.” I walk over to her and wrap her in my arms. “I’ll take him.” I might’ve been too young to save my mom from ending her life, too young to understand she needed help, despite my dad thinking he could fix her himself, but I’m older now, and I can make sure Paola is never in the same position as my mom.

As she sobs into my chest, I catch a bit of movement out of the corner of my eye. Brody. He’s home. He must’ve come in through the garage. He’s listening and watching from around the corner. Our gazes clash, and the sad as fuck look in his eyes tells me he’s been listening.