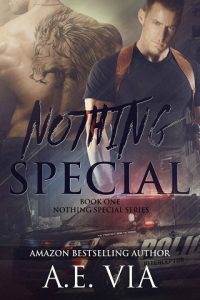 How He is Something

Detective Cashel Godfrey groaned and rolled his eyes at the captain’s obvious statement of their goals. He was pretty sure that all the officers just graduating the academy didn’t want to die anytime soon. Fifteen new recruits were squeezed into the meeting room eagerly anticipating who they'd be partnered with and how soon they'd be able to hit the streets. The ever-present hero complex shinning in their eyes.

Godfrey tried to inconspicuously survey the freshly shaven faces. He didn’t recognize any of them. Most of the cliché rookies were sporting gelled hair, large, tattooed biceps, and backward Ray-Bans resting on their thick necks. He tried not to be obvious while looking into their eyes—seeing if he could make a connection with his future partner. He wasn’t prepared for the light brown eyes that locked onto him, unblinking.

Godfrey quickly took in the man’s lithe, strong physique. Although he was sitting, Godfrey knew he couldn’t be any taller than five-foot-ten, five-eleven. His hair was dirty blond, free of product, and longer than he’d expect a rookie to wear it. His trendy five o’clock shadow was already present at eight a.m. Godfrey unconsciously fingered his own neatly trimmed goatee and saw the man quirk up one side of his mouth, his gaze still steady on him.

His arms were crossed over his chest and the short-sleeved, blue polyester uniform shirt allowed a peek at the skull and crossbones tattooed on his left biceps. Godfrey had to squint his eyes to see the simple lettering on the three-inch nametag just above his right pocket. DAY. When he brought his eyes back up, he could see Day’s intelligent eyes were sizing him up just as hard.

Godfrey heard the captain clap his hands together once, breaking their stare-off.

“All right, officers, you’ll spend most of today in admin getting your IDs and log-ins for the database, there’ll also be a few uniforms to do tours of the station: interrogation rooms, holding tanks, records room, gym, locker rooms, blah, blah.” He trailed off. The captain looked hard at everyone in the room. “When you’re finished today, I want you all to go home, fuck your wives, and kiss your kids; because from tomorrow forward, I don’t give a fuck about office hours… you’re here until I say you can leave. I own your rookie asses until you prove otherwise. Got it? Any questions?” His voice boomed in the small room.

“What is it, Officer Day?” The captain turned hard, dark eyes on the man, already sporting a sarcastic smirk.

“What if you don’t have a wife to fuck, sir?” Day quipped, his mouth twitching at trying to hide his amusement.

“Then fuck your boyfriend, Day, I don’t give a shit, just make sure you can still drag your ass back in here at zero-dark-thirty tomorrow, smart-mouth.” The captain snatched his paperwork off the podium and left the room.

“Yes, sir,” Day whispered after the captain slammed the door.

The men started to gather their stuff, getting ready to file out of the room. Godfrey lingered, watching Officer Day pull out his cell phone and use a thin stylus to manipulate the small screen.

“Well at least we’ve spotted the faggot early on, so we know who to protect our junk from in the locker room.”

Laughter rang throughout the room.

Day’s head eased up slowly and leveled what Godfrey assumed was his annoyed face at the wannabe 21 Jump Street cop who'd stopped to see if he could push Day’s buttons while securing his reputation as the homophobic, asshole cop.

Godfrey slowly eased around the table, approaching the cop from behind and Day immediately locked on to Godfrey’s eyes over the asshole’s shoulder.

Day looked at the man’s nametag. “I think your pencil-dick is safe, Ronowski… you’re not my type anyway. I have a strict no-bastards rule. Now move on.”

“I wouldn’t fuck you if your dick jizzed liquid gold.” Day smirked while a few other officers laughed.

Ronowski took a couple steps closer to Day and things suddenly turned real serious, drawing several of the officers in the room in closer.

“Just make sure you stay the fuck away from me, ass-licker.”

Godfrey was moving up the row when he saw Day pocket his cell, snort, and flick the side of his nose with his thumb, the telltale sign that he was getting ready to knock this asshole out.

“I said: move on,” Day growled, his furious hazel eyes now the color of burning amber as he closed the distance between him and his bully. Godfrey was now directly behind the asshole, who was completely oblivious to his position sandwiched between fury and disgust. Godfrey was actually beyond disgusted. He couldn’t believe there were still people with this hick-town mentality. He’d had to deal with prejudices and bigotry all his life, growing up in Clayhatchee, Alabama. Just when he thought he’d escaped it… it rears its ugly head again.