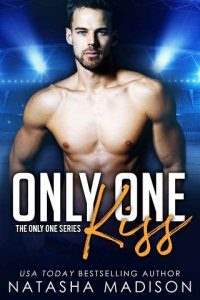 “Aaron, please explain to me how you ended up ‘balls deep’ in the Stanley Cup?” You fucking idiot, I say in my head instead of out loud, pinching the bridge of my nose as I lean back in my chair.

I close my eyes as I listen to him. “Can.” He groans my nickname. “It was a private party. I’m allowed to be naked at my house. Fuck, I just won the Stanley Cup,” he snaps.

“There were over one hundred people there. Did you know all one hundred?” I ask but then don’t wait for an answer before I continue. “I wake up this morning to phone notifications through the roof, and then I open it, and there you are. Swinging your dick like you’re fucking Tarzan.”

“You looked at my dick?” He chuckles, and now it’s my turn to groan. “I always thought you liked me. But now that you see I’m a shower and a grower…?”

“Can you for one second shut up?” I ask, trying to stay professional by not telling him that I wouldn’t touch him with a ten-foot pole. “How do you want me to spin this?”

“How about you say that I was celebrating on my own private property, and that being said, I was having fun.” He almost groans out. “It’s not that big of a deal.”

“Actually,” I start. “It’s a huge deal, considering we spent the past year pushing you as a family man.”

“How do you think I got the family?” He laughs at his stupid joke, and I know that this conversation isn’t going nowhere.

“Auntie Can!” Hearing my name, I look up from my laptop toward the doorway and see my three-year-old niece, Zoey, running toward me. She climbs onto my lap, and I kiss her head as she leans forward to grab the pen next to my agenda. I reach for her book and open it so she can doodle on it.

I hang up with Aaron and look at my niece. “Don’t ever date hockey players,” I say and then hear my brother, Evan.

“Don’t ever date anyone,” he says, and I look over at him as he leans against the doorframe watching us. He and his wife, Zara, are in town from New York, visiting for the week. I’m in Dallas because Evan got drafted here when he was eighteen. When he turned twenty, his career really started to take off, so he began to work on his image and his branding, and that is where I as his little sister came into the picture. I took over his social media accounts, posting things each day, and the bigger he got on Twitter and Facebook, the more his jersey flew off the shelves. He brought me out to visit him, and the visit lasted longer than anyone expected. It started with him telling one person, and then the other person told another one, and I now manage the social media accounts of over fifty NHL players. I speak with each of them or their assistants once a month, and we go over everything they need. I also have a waitlist for the ones I can’t take on right now.

“What are you complaining about now?” Zara asks, hugging his waist. The story of the two of them is rather funny. She tweeted him, and before I had a chance to answer her, he agreed to be her plus one to crash her ex’s wedding. Well, I wasn’t the nicest person to her when she first came into the picture. To be completely honest with you, I was a bitch. I hated her before I’d even met her, but then I slowly got to know her. When he got traded to New York, he tried to get me to go with him, but my home was here in Dallas now. This is where I wanted to be.

“He’s complaining that Zoey can’t date,” I say, and she just shakes her head as I hug Zoey close to me. I kiss her head, and she looks up at me with big eyes and a huge smile.

“Did everything work out okay?” Zara asks, coming into my home office and sitting on my new loveseat. I smile when I look around because it’s decorated in my favorite color pink and everything I love from the throw pillows on the cream-colored couch to the furry pink leopard blanket that Zoey usually uses as a cape.

“I mean, define okay?” I say and then look down at Zoey who squirms in my lap to get down. Grabbing her pen and book, she walks over to the loveseat and climbs up next to Zara.

“I saw the video,” Zara says, looking down to make sure that Zoey doesn’t color on the cushion.

“You saw the video?” Evan asks in shock, coming in and scooting Zara over so he can sit next to her and pull her closer to him. “Why would you look at the video?”