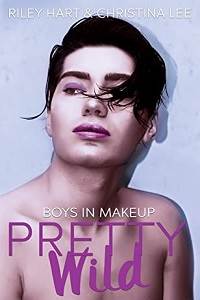 “Damn, you know how to shake your ass!”

I gave it an extra wiggle as I dropped down, bounced a couple of times, then stood up real slow, giving the guy an even better view of the booty he was admiring.

He stuffed a twenty in my tight, pink Speedo. “Thanks, love.” I winked, then continued to dance.

The Playground, the Portland gay bar I worked at, was crazy tonight, full of pretty boys dancing, kissing, and offering me money to do something I already enjoyed doing for them—performing.

Beads of sweat rolled down my body. When I felt something wet on my calf, I looked down to see someone had licked me. “Hey. None of that. I don’t know where your tongue has been. Do it again, and I’ll have security throw you out.” Obviously, not everything was perfect. There was an asshole in every crowd. I didn’t mind being licked, but I was all for giving my consent for it first.

When I turned away from the tongue, my eyes met dark-brown ones across the room. The guy had his arms crossed. He was gorgeous—blond and muscular, with lips to die for. He’d hit me up earlier, and we’d decided to hang out when I got off work tonight.

I winked at him, and he grabbed his crotch. So okay, maybe he was a tad over the top, but he was pretty to look at.

I finished my dance, and when there was a tap on my thigh, I saw Peter, another dancer who would take my spot for a while. I climbed down. “Have fun, man,” I told him, then made my way to the back.

I pulled sweaty money out of my underwear, straightened the notes, and stuffed them in my locker.

“Hey, you.” Jesse approached me. Like he almost always did, he had on a full face of makeup. Jesse was my closest friend at the Playground. He used to only work in the main part of the bar with me, but now he also spent time in the Underground, the downstairs bar, which had a speakeasy vibe to it. They posted a password on Instagram every day, and you had to have it to get in. Jesse sometimes sang there, and his boyfriend, Dane, tended bar in both places.

“What’s up, Jesse?” We always had some kind of friendly competition going. It used to be about things like who got the hottest man for the night, but he’d been in love with Dane for a while, and they were in a committed relationship. Nowadays it tended to be about who pulled in more tips, or was more flexible, or looked better in their outfit. All in good fun, though. I would do anything for Jesse, and I knew he would for me too.

Jesse said, “Some guy licked the sweat off my leg out there.”

“He got kicked out. I thought Dane’s head was gonna pop.”

We chuckled. Dane wasn’t the jealous type. He knew dancing was Jesse’s job, but that didn’t mean he wanted Jesse’s sweat lapped up as if it were a bowl of milk and the other guy a kitten.

We chatted for a while before we had to go out and dance again. One of my favorite things about it was the way I could lose myself, simply let my body take over and everything else drain from my mind. I used to get that same feeling from gymnastics. I’d started when I was five and fell instantly in love. Mom and I hadn’t had much in life, but even though she’d always struggled, she made sure we could afford my lessons. It had been the only thing I’d felt good at when I was younger, and it helped me forget all the other shit.

It was almost closing time, and I was dancing up on a podium, the muscles in my legs feeling slightly weak from all the movement that day, when I heard, “Skylar!”

I turned to see Burt, one of our security guards, standing close to the riser, so I bent down and asked him, “Did the weird licking guy get back in?”

“No. There’s, um…there’s a lady outside? She’s crying and upset. She says she’s your mom?”

My heart dropped to my gut, making me nauseous. “Fuck,” I gritted out.

“Go.” Burt nodded toward the door. “I’ll get someone to fill in.”

“Thanks, man.” I leaped down and worked my way through the crowd to the front door. My stomach was in knots, this strange mixture of worry that something bad had really happened and frustration because I had a feeling it was more of the same old thing. Still, she’d never shown up at work like this before. That thought made my feet move faster, until I felt the fresh air around me.

The sidewalk was busy as always on a Friday night—people waiting to get in, people coming out, and those who just liked to be in the middle of everything.