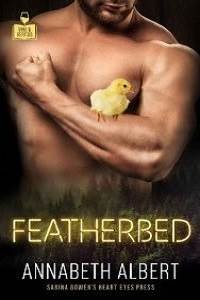 Chickens, literal feathered and clucking chickens—not the primed-for-roasting-at-375-degrees kind—were not at all what my Monday needed. But apparently the universe had noted my foul mood and sent fowl. As in, a box of weird-looking chickens currently sitting outside my bookstore’s loading dock.

“Is this a joke?” I asked Oz, our new stocker, who’d come to fetch me to deal with a “situation.” I’d expected a box-cutter injury or damaged goods, not chickens. “Like one of those haze-the-city-slicker things?”

I wasn’t going to be amused if that were the case. Oz was a nice enough younger guy, maybe twenty-five or so, but he’d been with us less than a week, and already he seemed to take great delight in correcting any wrong assumptions on my part about Vermont life.

“No joke. I like being employed.” Oz had a devilish grin. Nothing much seemed to bother him, and even now he seemed more stumped than alarmed. “And I’m more of a sausage guy than a chicken fan, myself.”

“Oz,” I warned, gesturing at the giant, clucking box. “If it’s not a joke, how did we end up with chickens? We’re a bookstore.”

I wasn’t entirely sure what sort of store around here might sell live poultry, but it definitely was not my brand-new bookstore, which specialized in LGBTQ+ titles and merchandise. Nothing feathered, stinky, or clucking allowed.

And these chickens were all three. The two large red-and-white boxes proudly proclaimed, “Live Birds” and had mesh-covered airholes through which we could see the indignant, squawking birds. And smell them. They didn’t look like the happy chickens that graced fast-food ads at all. These were all black and looked to be young. Older than fluffy chicks, but probably not grown enough for Sunday dinner. Maybe these birds were destined to be pets and not served at a table? I heard people did that around here, kept them in their backyards, gave them names. Some of my mother’s new neighbors apparently had a two-story chicken condo in their yard.

Vermont. Not for the first time, I had to shake my head. I’d agreed to my mom’s crazy plan to move to this mostly rural state, but I hadn’t been prepared for the culture shock.

“Huh.” Fearlessly getting closer to the birds than I would, Oz bent down to examine the boxes more closely. The postal labels were smeared and mangled, like they’d been caught by some machinery. “These are for 4569 Church all right,” Oz said, “but I’d bet it’s supposed to be Old Church Road, down past South Burlington. There are some big farms in that area, including that hot chicken guy’s, I think.”

“There’s a hot chicken guy?” I had to blink.

“Yeah. I’ve seen him around at some of the farmers markets. And from a field trip in high school. His family owns one of those popular multi-season, multi-reason farms where people can learn about animals and buy all kinds of homegrown goods. Want me to call?”

“No. I can do it. I’ll start by looking up the address.” I pulled out my phone to give myself something to do besides gape at the chickens. And because the last thing I needed was Oz thinking I couldn’t handle a crisis.

Not that chickens were a crisis, precisely, but I did try to project professional competency, even in this new-to-me venture. And I also wouldn’t put it past Oz to hit on this chicken guy, and that too would be less than professional.

A quick search on my phone’s browser revealed that 4569 Old Church Road was Puddlebrook Farms, and luckily there was an available public number. Their website featured lots of pictures of scenic meadows, a quaint farm stand, and many baby animals. Including some chicks. Promising. I pressed the link to make a call.

“Puddlebrook.” A deep, masculine voice answered, and damn Oz for putting the hot farmer idea into my head. Despite the sexy voice, this guy was probably over sixty with an impressive lineage of grandchildren.

“Hello. Are you missing some chickens?” I tried for friendly but direct.

“Is this a prank?” The voice softened, more of a tease. Didn’t sound like a retiree. His warm tones made a tickle race up my spine and had me cursing Oz again. I’d always had a bit more imagination than was healthy.