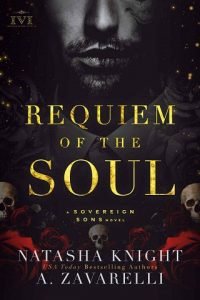 The lace of my dress scratches my skin. I shiver. It’s cold, a wet cold as soft mist turns to rain. Rain on your wedding day is good luck, right? Isn’t that what they say?

Candles protected inside glass lanterns line the stairs leading up to the double front doors. I stare up at them, remembering the last time I stood here. It’s been a while.

The doors are opened. Organ music and incense pour out.

I close my eyes, listening to the sound, and take a deep breath. The scent and sound combined are dizzying.

No, it’s not those things that have me swaying on my feet. It’s what’s coming. What’s waiting for me at the end of the aisle.

My brother wraps his hand around my arm. He mutters a curse as he rights me.

I grip my bouquet of blood-red roses. If I’m not careful, I’ll crush them. They’re striking. Beautiful. Like my dress. He has impeccable taste, my fiancé, and he likes things a certain way. He has rules. And he’s used to getting exactly what he wants.

I’m slow as we ascend the stairs toward the entrance. It irritates my brother, I know, but everything irritates him. The toe of his shoe catches my long veil, tugging my head backward momentarily. A few steps more and we stand inside the vestibule, the organ louder, the incense stronger, combining with the smell of melting wax.

The doors close behind us, that final divide between what was and what will be. My past and my present. The voice inside my head urging me to run grows louder, but I don’t run. It’s no use.

Our guests rise to their feet, gazes blank as they turn back to look at me, their sacrificial bride. I don’t see their faces, though. They’re just shapes in my periphery. I only have eyes for one man. The stranger before the altar. The stranger in whose bed I’ll sleep tonight.

The room sways, and my brother’s grip tightens. I’ll have a bruise tomorrow. We take one step then another. I clutch my bouquet like it’s my lifeline. My nails break the skin of my palms, the blood slippery, wet, the pain keeping me from giving in to the vertigo.

A thousand candles bathe the cathedral in a soft glow, the music more fitting for a Requiem Mass than a wedding march. I guess he chose that too. It goes with the dress at least. My fiancé’s doing. I understand why.

My eyes lock on him. He’s half-turned toward us, watching us.

My brother walks me past our guests. I only recognize one or two. All men. Only men. A dozen of them. My own mother is absent. I glance at my brother, see a dark smear of dirt or blood on his collar. I hadn’t noticed it before, and I want to ask what it is but don’t. His jaw is set, eyes hard. It should have been my father walking me down the aisle, but he can’t do that.

Sadness washes over me, but I don’t have time for it. Not here. Not now. Because we’re almost there.

I look down at the polished marble floor cold against my bare feet, and I take my final steps to the altar where every sound is amplified in this strange dream that is somehow my reality.

My brother turns me to face him. He lifts the veil, then leans down to brush his cold cheek against mine. My eyes lock on my fiancé over his shoulder. His face is still in shadows, but he’s watching us. Watching me. I see the glint of hazel eyes.

The man who has chosen me for his wife.

The man to whom I will belong.

My brother straightens. With a tug, he offers my hand to Santiago.

I swallow hard, my heart pounding against my chest, and when Santiago takes my wrist, the flowers slip from my grasp to scatter at our feet, blood-red against the stark, cold marble.

I barely notice because I am riveted.

Because that's when the candles flicker, sending light and shadows dancing across his face, and I get my first real glimpse of him. My breath catches in my throat, the gasp drowned out by the organ, by the sound of the priest telling the witnesses to be seated, and the creaking of the ancient pews as the ceremony begins.

I keep my head ducked against the rain as I climb out of my car and tug my bag out from behind the seat. It’s a worn messenger I’d found collecting dust in the attic before I left for school this past fall. I strap it over my shoulder and hurry toward the apartment building.