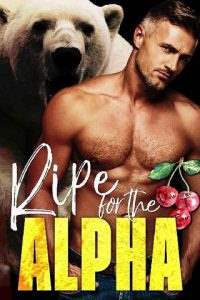 Her scent is filling my nose and lighting my body on fire as I speed down the quiet mountain road. I look over at her pink sweater on the passenger seat and inhale deep.

I squeeze the steering wheel as my chest tightens. Her scent leaves a burning trail as it sears its way down my throat and into my heaving lungs.

It’s like breathing in smoke and fire and embers all at the same time. And it feels so good.

My inner polar bear is pacing around inside, huffing and growling with impatience. He wants my mate in my arms with our mark on her neck.

I want the same thing.

But I still haven’t seen her. She’s still missing.

I’m the Sheriff of Blackcloud Point and recently found out that a sweet young girl named Ellie Kerr had gone missing from the town over. I received a package with the details and it included a pink sweater that belonged to her. When I opened the sealed bag, her sugary scent hit me like a tsunami of emotion.

My possessive polar bear recognized her as our mate immediately and demanded that I go find her.

I was thinking the same thing. There was nothing I needed or wanted more in that moment than to find her and protect her. My mate is in danger and I’m not by her side to protect her, which is a bear shifter’s primary function.

It’s been killing me. Eating at me. She needs me and I’m not there.

I spent the last three days trying to find her. No sleep, no food, no nothing. All I’ve been doing is working as fast and as hard as I can. I chased down and roughed up every two-bit thug and criminal I could find to get some information.

Witnesses said that she was taken by four men on motorcycles. Four large men.

I think I know who they are.

The Copeland lion shifters. They better pray that it’s a case of mistaken identity, because I’ll kill every single one of them.

The badge on my chest won’t stop me. This isn’t about the law. This is about vengeance.

They messed with my mate. They took her. They laid their filthy paws on her innocent young skin. They’ll all die for that.

I’m gritting my teeth as my foot holds the pedal against the floor. The lights are swirling over my head and the siren is ringing in my ears as I swerve around blind turns and race up and down the windy mountain road.

Finally, this morning I got a tip of their whereabouts. They weren’t on their dead brother Killian’s ranch. That’s the first place I looked.

This morning I was roughing up a bartender in a shitty bar outside of town who likes to sell drugs to his customers. I didn’t care about the drugs. I just wanted to know what he heard about Ellie.

At first, he wasn’t talking, but when I pulled out my polar bear and fit his head in my bear’s mouth, he opened up real good. The words couldn’t come out fast enough.

He told me that the four remaining Copeland lion shifters were holed up in an old shack about forty minutes from Blackcloud Point with the girl. They were holding her for ransom from her rich parents. They wanted a cool five million dollars.

I got the directions and left immediately.

I’m about four minutes from breaking in there and taking what’s mine.

She hasn’t met me yet, but she belongs to me.

It’s preordained. By the Universe, by God, by fate. I don’t know. It doesn’t matter.

My bear has preordained it and there’s no stopping that furious white bear.

As the four dead lion shifters are about to find out…

I barely throw the car into park before I’m jumping out of it and racing toward the dilapidated shack.

My inner polar bear is snarling and surging forward, trying to get out. I flex my body and push him back down with a low grunt. He’ll get a taste of lion flesh before this is finished, but I want to land the first blow. I want to feel bones breaking and necks snapping under my big hands first.

Her scent is all over this place and it nearly knocks me to my knees as I sprint toward the front door. I’m in the middle of nowhere, surrounded by old trees and high mountains. I would have missed it if it wasn’t for the four motorcycles parked beside the shack.

The door opens as I arrive at the steps. It’s Jace. He jerks his head back as his eyes widen with panic when he sees me.

He quickly slams the door closed in my face, but a thick piece of wood isn’t going to stop me from claiming what’s mine and killing the men who took her from me.

I immediately squeeze my hand into a fist and punch right through the door with a grunt. With my hand inside, I grab him, wrapping my strong fingers around his neck. I feel his hands clawing at my wrist, trying to loosen the intense grip I have on his throat, but I’m not letting go.