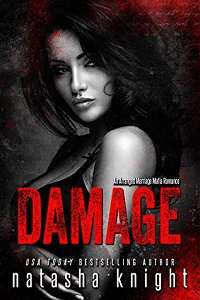 Waves swell in the wake of the speedboat, lifting me up then dragging me under while gunshots fire around me. Someone shouts an order but I’m under again, swallowing water, choking on it.

“Are you going to drown me too?”

Instinct takes over and I kick.

Arms paddling wildly, I manage to break the surface, gasping as I suck air into my lungs.

Waves again, and gunshots. A flurry of them.

I think that scream is mine.

In the dark, I see our boat bobbing and swim to it. See one of the two men slumped over the side as the other frantically reloads his weapon.

It’s no use though. They have machine guns. A pistol doesn’t stand a chance against a machine gun.

More shouts and I’m picked up by a wave again and when it drops me down, my elbow slams against hard wood, the pain electric.

I push through it to grab onto the side of the boat and hold tight, but the reprieve is only momentary because the bigger boat speeds closer and I wonder if they’re going to crash right into us. If that’s their intention.

I don’t have to wait long to find out because the man on our boat stands. It rocks violently and when he dives over the side, our boat capsizes. I lose my grip and scream, my head crashing against the hard wood and what was once my salvation becomes my undoing as I go under.

“Are you going to drown me too?”

I asked Stefan that question.

The waves don’t carry me up as I go limp and I watch the sliver of light. A floodlight, maybe? I watch our capsized boat go down. Watch the man who’d been slumped over the side float away, blood from his wound turning the water crimson when that light momentarily shines down on him.

I don’t know if my eyes close or if it’s that dark. How can it be so dark? I’m floating, my arms rising above me as I become weightless.

The sound water makes when you’re immersed, it’s almost other-worldly. The gurgling, bubbling, as the shock of cold, of dark, take me deeper.

I have to wake up.

I have to swim.

Salt burns my eyes, but I turn my face up toward that light. I kick and push against the water and there’s someone else. Someone in the water. It’s not the dead man. He’s long gone. Down in that dark. Food for the fish.

But then there’s an arm around my middle and it’s strong. Stronger than me.

He’s a powerful swimmer because we’re moving, rocketing up.

I gasp when we break the surface.

A hand in my hair pulls painfully and I remember that day. I remember the lake. It was a black night like this one, the sliver of moon offering only the barest light.

I remember my mom. I see her now.

I feel pain as that grip tightens and I’m under again and I fight. I fight like she couldn’t, and someone laughs when I break the surface only long enough to suck in a single, gasping, wet breath before I’m down again, underwater, the sea gurgling in my ears, a hand keeping me down.

Nothing peaceful about this drowning. I wonder if it could be peaceful, after the pain. After the terror. I don’t think so.

No salt in the lake. That was a blessing. Did it burn as much when she sucked water into her lungs?

“Enough!” a man shouts in Italian. “He doesn’t want her dead for fuck’s sake. Haul her up.”

Pain again because he’s pulling me up by my hair. A moment later, I hit a hard surface. I turn onto my side and cough up water and vomit, half-choking on it.

Men talk. Someone yells. The engine rumbles beneath me and we’re moving.

Someone strikes a match and a moment later, I smell a cigarette. Small details. Why am I concerned with small details?

“She done puking?” someone asks.

A nudge at my hip, my back.

I roll my head and my eyes burn when I open them to see the dark form looming over me, faceless and menacing.

“Then get the hood on her, idiot!”

The faceless man grunts and leans down. For an instant, I see his yellowed teeth as he laughs, sticks his cigarette between his lips. Ash falls on my face and when I feel the hood being drawn over my head, I fight. I don’t know how, but I fight, screaming, clawing at arms, a face, a wet eye.