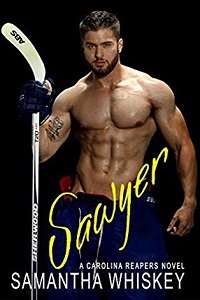 “Can I get a Coors Light?” a guy in a red tie shouted above the crowd as he leaned across the bar.

“No problem,” I answered. I poured his beer by muscle memory and moved on to the next customer. The bar was busy, but that was typical of a Saturday afternoon during hockey season. The Sharks weren’t playing until later, so we had the Reapers’ game on, which was in the third period in Tampa.

I listened to what commentary I could hear between filling orders but didn’t glance up much.

Had to admit, it hurt like a bitch to watch. The only thing harder than not reaching your dream? Tasting it for twenty-eight seconds.

“Hey, McCoy, weren’t you the emergency goalie for the Reapers a few months ago?” Charlie, one of our regulars, asked like he could read my fucking mind.

“Sure was,” I answered while I poured another beer.

“He was a goalie down at U-Dub, remember?” another regular chimed in.

So had I. That’s what I wanted to say.

“Oh, yeah?” I answered instead because that was the easiest thing to say.

I had been a damned good college goalie. I just hadn’t made the cut for the NHL. Not that I hadn’t gotten my shot. Luck had made Faith Gentry—now Vestergaard—my roommate, and since Faith’s brother Eric turned out to be the goalie for the Sharks, he’d gotten me a tryout.

I just hadn’t been fast enough to make the roster.

“Vestergaard scores!” the announcer called out, and this time my gaze jumped to the screen.

A small smile lifted my lips. Faith’s new husband was a great guy. It just sucked that he’d moved her all the way to South Carolina. But that was how I’d ended up in a one-day contract as the emergency goalie for the Carolina Reapers when their backup had gone down.

Now I had a Reaper jersey with my name on it that hung on my closet door, and a twenty-eight-second memory of exhilarated perfection that nothing else could top.

It was something I’d hold on to because it turned out that majoring in exercise science meant I was qualified to be a trainer at the local gym and hold down a few shifts at Rusty’s, the local sports bar in my Seattle neighborhood. I busied myself with more orders, sliding down the bar, away from the regulars. There was only so much prodding a wound could take, and I was feeling raw tonight.

“Hey, Sawyer! How’s your mom?” another regular asked as he slid into the empty seat.

Fuck me, there was no escape tonight.

“Good as can be expected,” I replied, forcing a smile to my face. Mom was the reason I stayed in Seattle. She’d stuck by my side as long as she was physically able, and I would do the same for her.

“You’re a good kid,” the older man said, just as the bar erupted into a series of groans, gasps, and mutters. “Damn, would you look at that?”

I followed his line of sight and turned to face the giant screen at the end of the bar. My stomach flopped. Fields, the backup goalie for the Reapers, was down and grabbing for his knee—the same one he’d injured months ago.

The game went to commercial, and I knew it had to be bad. I took care of waiting customers, poured a few shots for the group that had just walked in and held my breath until the game came back on.

“Hey, McCoy, think they’ll call you to be their emergency goalie again if Fields is hurt?” Charlie asked.

“Nope,” I answered with a wry grin. “It’s not like they’re due to play Seattle again any time soon.” Not until playoffs, and since both the Reapers and the Sharks were leading their respective conferences, there was a good chance they’d see each other in May.

“Still, that’s gotta be something,” Charlie said with a shake of his head. “Being out there with them.”

“It was,” I replied. But I wasn’t foolish enough to think that lightning would strike twice.

The game continued with Thurston in the net, but he was slow glove-side and had been since last season. Guy was getting older and it showed, not just in his glove, but the sluggish skating and mediocre reaction time. He was a legend, but even legends aged. The network showed clips taken during the commercial break of Fields being carried out on a stretcher, and I cursed under my breath.

The Reapers won five to two, but those last two goals had been scored on Thurston, glove-side of course.

Two hours later, I walked out after my shift as the clock hit five. I still had time to hit the gym and get a good workout in. Tomorrow was Sunday, meaning no training sessions. I could sleep in, then pick up some of Mom’s favorite bagels and head up to her place before the pick-up game I had scheduled.