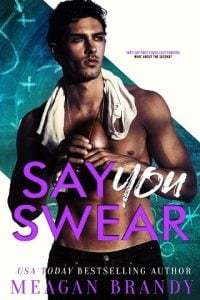 The drive to Oceanside is usually a peaceful one, but my brother, Mason, and his two best friends, Chase and Brady, came to an unspoken agreement last night that “one more,” meant one more twelve-pack. So out they stayed, saying drunken goodbyes to our classmates at the very last summer party to be had in our hometown.

My girl Cameron and I knew better than to party hard the night before a drive, so we headed home early to finish packing for our final trip to the beach before college life begins.

A trip that should have taken no more than three and a half hours, yet we’ve already been in this damn SUV for five. We learned years ago that long drives with pouty, hungover man-boys are not fun, but here we are again, willing yet slightly annoyed participants in the ‘how many times does one man have to stop to piss’ experiment.

The answer is seven. We stopped seven times already thanks to Brady’s baby bladder.

At least they seem to have sobered up in the last fifteen minutes, finally allowing us to turn the music up loud enough to where we can actually hear it.

Group car rides are pretty much the only time I get to feign innocence when I lean a little further into the star player of my fantasies, more commonly known as my brother’s best friend.

‘Play but don’t push’ is the game I’m forced to settle for and I’m good at it. Probably because I’ve had the better part of six years to perfect it.

See, the day Chase and his family moved in across the street, I saw him first. It was as if an invisible stamp came down and pressed across his forehead, a big fat red label that screamed mine.

Sure, I was only in junior high, but I’d seen The Boy Next Door. I understood the power of obsession and mine started the minute I laid eyes on him. Granted, mine wasn’t the murderous sort, and watching that movie gave me hardcore, unachievable body goals, but all that’s beside the point.

Chase Harper had arrived in the neighborhood, and I was determined to be the one to show him around it, so I pressed the brakes on my bike at the edge of his lawn, gaining his attention.

The minute his brace-face smiled at me from across the yard, my twin appeared out of nowhere, something he’s inconveniently good at.

Mason rushed him, tackled him to the ground, and when he stood, he fed Chase a line I sometimes wish he’d choke on.

He growled, “Stay away from my ‘little sister!’”

In horror, I watched as Chase hopped to his feet, literally, like some sort of spider monkey shit. I held my breath, readying for the fight I suspected to follow—yeah, my brother was known to knock a kid out when it came to me—but then Chase laughed and we all fell silent.

The brown-haired, green-eyed boy turned to my brother with grass in his mouth, a grin curving it, and asked Mase what football team he played for. He was looking for one to join.

I huffed and rode off, because I knew with that single question asked, Mason and Brady had a new best friend, and I was, once again, colored in red, an invisible back slashed circle painted across me.

In the span of five minutes, my brother’s duo grew into a trio, and our house became their hangout spot of choice. I never understood the whole forbidden fruit thing until then, how not having something only made you want it more.

It’s a bunch of bull if you ask me.

Unfortunately for me, no one did, so I sat back, forced to watch as the jocks of junior high became the hotties of high school.

Every girl wanted a bite, but who could blame them?

They were model students, star athletes, and undercover bad boys. No matter a girl’s type, one of the three was sure to fit the bill.

I like to joke that they’re every shade of Dwyane Johnson since he seems to be different, yet extremely fit regardless of the role. Brady would definitely be the WWE version.

No, but really, all three were gifted with good genes. Mason, my overprotective twin, is tall and trim, and could literally stunt double for a slightly younger Theo James. Brady’s a bulked-out Ken doll, and Chase is, well, the epitome of perfection.

Unfortunately for me, every girl agrees.

He has the same height and build as Mase, but his brown hair is a few shades lighter. His eyes, vivid and upbeat, are a mix of grass and seaweed. He’s kind, strong and confident. Almost as bossy as Mason and Brady, but out of the three, he’s the only one who cuts us girls some slack from time to time.

I’ve convinced myself it’s his way of differentiating himself from protective older brother to a man with eyes and hidden desires, but I’m known to be a wishful thinker.