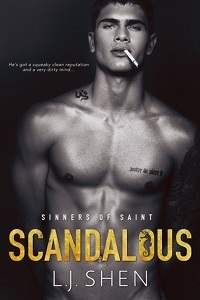 Seahorses prefer to swim in pairs with their tails linked together. They’re one of the rare monogamous animals, and engage in an eight-hour courtship dance which, among other things, includes swimming side by side and changing colors. They’re romantic, elegant, and fragile.

They remind us that love is meant to be wild, just like the ocean.

1: excess in eating or drinking

2: greedy or excessive indulgence accused the nation of energy gluttony.

THE WORST OUT OF THE seven deadly sins. In my opinion, anyway. And my opinion was the one that mattered in that moment, under the unforgiving sun of SoCal on a May afternoon on Todos Santos’ promenade, when I was in desperate need of some cash. Leaning against the white railing separating the bustling boardwalk from the shimmering ocean and dazzling yachts, I people-watched.

I judged them. The way they drank their organic, ten-buck smoothies and glided on custom-made multi-colored skateboards signed by Tony Hawk. I judged them, knowing full well they couldn’t do the same to me. I was in hiding. Veiled beneath a thick black hoodie, my hands shoved deep inside my pockets. I wore black skinny jeans, an old pair of unlaced Dr. Martens, and a tattered JanSport backpack held together with safety pins.

And today, I was about to do something that’d make living with myself harder.

As with any dangerous game, there were rules to abide by: no children, no elderly, no struggling, average folk. I thrived on the rich, targeting the prototypes of my parents. The women with the Gucci bags and the men in the Brunello Cucinelli suits. The ladies with the poodles peeking out from their studded Michael Kors handbags, and the gentlemen who looked like they were comfortable spending on a cigar what a normal person would put toward their monthly rent.

Spotting potential victims at the promenade was embarrassingly easy. Todos Santos was the richest town in California, as of the 2018 census, and much to the old money’s dismay, Nouveau Riches like my father had come settling on this piece of land, armed with monstrous, Italian-imported vehicles and enough jewelry to sink a battleship.

I shook my head, staring at the explosion of colors, scents and tan, half-clothed bodies. Focus, Edie, focus.

Prey. A good hunter could smell it from miles away.

My meal for the day had passed me briskly, unknowingly drawing attention to herself. She threw her head back, revealing a straight row of pearly whites. A middle-aged, Chanel-wearing trophy wife, wrapped head-to-toe in the latest season’s garments. I wasn’t big on fashion, but my father loved spoiling his beloved mistresses with luxurious garbs and parading them around at social events, introducing them as his very personal assistants. My mother would buy these designer items herself in a desperate plea to resemble the younger women who entertained him. I knew wealth when I saw it. And this woman? She wasn’t hungry. Not for food and not for love, the only two things that mattered.

Little did she know, her money was going to buy me love. Her soon-to-be empty wallet was going to fill my heart to the brim.

“I’ve been dying for a duck salad at The Brasserie. Think we can go there tomorrow? Maybe Dar will tag along,” she drawled, puffing her chin-length platinum bob with her manicured hand.

Her back was already to me when I noticed her arm was linked with that of a tall, dark, and handsome type, at least twenty years her junior. Built like Robocop and dressed like a dapper David Beckham. Was he her boy toy? Husband? Old friend? Son? It made little-to-no difference to me.

She was the perfect victim. Distracted, disordered, and overbearing; parting ways with her wallet would be merely an inconvenience for this lady. She probably had a PA or some other form of poor, unfortunate soul on her payroll to deal with the consequences. Someone who would order new credit cards and issue a new driver’s license and unburden her from the nuisance of bureaucracy.

Stealing was much like walking a tight rope. The secret was in your poise and ability to not look into the abyss, or in my case, the victim’s eyes. I was lean, short, and nimble. I navigated through the throng of boisterous teenyboppers in bikinis and families licking ice cream, my eyes trained on the black and gold YSL bag dangling from her arm.

Sounds became muffled, bodies and food trucks vanished from my vision, and all I saw was that bag and my goal.

Recalling everything I’d learned from Bane, I inhaled deeply and lunged for the purse. I yanked it from her arm and made a beeline to one of the many alleyways slicing the shops and restaurants on the boardwalk. I didn’t look back. I ran blindly, desperately, furiously.