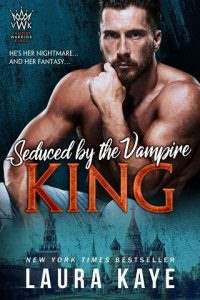 Nikolai Vasilyev was right in the middle of the shit, and it was exactly where he wanted to be.

Shots erupted from two positions ahead of him and ricocheted off the abandoned cinder-block streetscape he’d been patrolling. Ducking into an alley, he felt a telltale whiz of air buzzing his ear and went flat against the concrete wall of the old factory. The frigid winter night air burned Nikolai’s lungs. His hackles rose and his fangs stretched out. His enemies were close enough he could feel their evil.

He wanted trouble. And he found it. Or it found him. Semantics.

Somewhere ahead, concealed among the long-neglected buildings, a band of Soul Eaters apparently had a sniper’s roost. Those demented murderers jeopardized the hidden vampire world by caving in to the lure of exsanguination. All vampires drank from humans, but only the Soul Eaters consumed human souls by drinking through the last beat of their hearts, then removing and eating it. Their addictive recklessness threatened to expose them all to the broader human world, and escalated the ancient war between the two rival strains of immortals.

Nikolai plotted out a plan of attack, the street taking shape in his mind’s eye like a 3-D simulator. Dark satisfaction pooled in his gut. Sending these little birdies flying from their nest—permanently—was going to turn this night from a miserable waste to decently tolerable. It didn’t get any better than that for him.

Not since he’d dishonored himself, and the Soul Eaters killed Evgeny and Kyril.

The hushed, efficient chatter of his warriors sounded in his earpiece and drew Nikolai from his thoughts. Torturing himself over his brothers’ deaths had no place out on the street. There was plenty of time for that while the sun kept him inside cooling his heels.

He peeked over his shoulder and around the corner of the building. A volley of shots rang out and Nikolai growled a curse under his breath, his gaze swinging around to the rusted industrial street lamp illuminating his position. He sighted the bulb and squeezed off a single bullet that solved that problem, then turned, fell to a crouch and took another light out farther down the street.

“Who’s got a lock on that gunfire?” came Mikhail’s voice through the earbud. His second-in-command was a consummate soldier and the only thing holding his kingdom together at the moment. Nikolai was man enough to admit that. “Report in.”

One by one, six of his finest warriors gave the all clear and confirmed their locations.

Nikolai sighed. He didn’t want to share this one. He didn’t want to have to rein himself in. When he found the Soul Eaters’ position, he wanted to unleash the inhuman monster within, to surrender to the grief and rage boiling inside him as he tore his enemies to pieces with his bare hands and fangs. No fucking audience required.

As if they all didn’t worry about him enough. He hated the weighted silences and sidelong glances that seemed to follow him wherever he went these days. Christ, he needed to release a little of the volcanic agony expanding in his chest, making it hard to breathe, hard to think. Hard to care.

An awkward silence passed before he heard, “My lord, what’s your area of operation?” Mikhail’s tone no doubt sounded level and professional to everyone else, but Nikolai recognized the wariness and exhaustion in his oldest friend’s voice. Guilt soured his gut. “I say again, my lord, what’s your AO?”

Focusing on the task at hand, and not the way he was failing Mikhail—hell, failing all of them—Nikolai did a quick ammunition check and ran through his mental plan one more time. He took a deep calming breath and centered himself, using his memory of the last time he saw his brothers, expressions frozen in death, to fuel his resolve.

With indecipherable words still ranting from the speaker, Nikolai tugged the unit from his ear and yanked it from around his neck. He dropped it to the ground and crushed the receiver with his boot, insuring no one could come behind him and eavesdrop on his warriors’ movements.

With an apology to Mikhail and a vow to Evgeny and Kyril, Nikolai moved out onto the street, staying low and tight to the building. He set his sights on the general location from which the earlier shots seemed to originate and ducked into doorways and alleys whenever he could. Twenty meters ahead, a third street lamp posed an insurmountable problem. Whether he got rid of it or left it intact, he would reveal his position to the enemy.

He voted for the cover of darkness and took it out with a single shot, only the sudden blackness and sprinkling of glass against the concrete sidewalk revealing what he’d done.

A barrage of gunfire erupted, the snaps and crackles of high-speed projectiles close enough to make him dive for cover. The enemy fire brought something useful with it, too—the Soul Eaters’ muzzle flashes gave away their position and told Nikolai precisely where he needed to go.