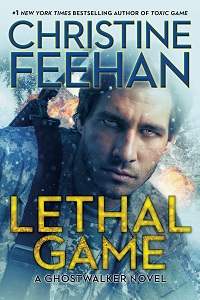 We are the GhostWalkers, we live in the shadows

The sea, the earth, and the air are our domain

No fallen comrade will be left behind

We are loyalty and honor bound

We are invisible to our enemies

and we destroy them where we find them

We believe in justice and we protect our country

and those unable to protect themselves

What goes unseen, unheard, and unknown are GhostWalkers

There is honor in the shadows and it is us

We move in complete silence whether in jungle or desert

We walk among our enemy unseen and unheard

Striking without sound and scatter to the winds

before they have knowledge of our existence

We gather information and wait with endless patience

for that perfect moment to deliver swift justice

We are both merciful and merciless

We are relentless and implacable in our resolve

We are the GhostWalkers and the night is ours

Like they all weren’t aware of the helicopter lurching from side to side as they came in low trying to put down where the wounded soldiers waited for transport. Malichai Fortunes kept one hand on his medical kit and the other on his rifle. He could shoot the wings off a fly with that rifle.

You’re up, soldier, Joe Spagnola, his team leader, said. Want you back in one piece.

Roger that. Malichai jumped without hesitation, landing in the snow and moving out of the way just in case Rubin Campo, another GhostWalker teammate, landed on top of him.

They both were dressed in white with splotches of gray to better blend into the environment around them. The moment they were on the ground, the helicopter was up and away, skidding sideways through the sky, dodging the deadly fire from three or four bunkers, with heavy artillery shooting continuously.

The moment Malichai saw that the helicopter was out of target range, he was up and running in a crouch, toward the coordinates of the small group of soldiers who had been shot down and were now pinned on top of that very cold mountain, surrounded by the enemy, with no supplies or medical aid and low on ammunition.

A hail of deadly machine-gun fire ripped across the mountaintop and zigzagged in a pattern up and down, seeking to find them and the wounded soldiers.

“Coming in,” Malichai called out, hoping his own soldiers weren’t going to shoot him.

He and Rubin leapt over the ring of rocks and landed just inside the circle the soldiers had made for themselves. Other than the rocks, there was little cover, and the men were freezing. Malichai had seen some pathetic setups, but this was one of the worst. Added to the fact that the soldiers were all wounded, the rocks didn’t make the best fortress. The enemy had enough firepower to blow those large boulders forming their stronghold to kingdom come.

Five men with various wounds lay in misery, but with their weapons ready. One attempted to sit, but Malichai waved him back down. They were all shivering continuously. The snow was stained red in places.

“I’m Malichai, that’s Rubin.” Deliberately, he left off any mention of rank. “We’re here to pull your butts out of the frying pan. Give me your assessment of each patient,” Malichai added to the one obviously assuming leadership.

“Jerry Lannis took the worst hit. His leg and arm. They were launching mortar fire and grenades. He shielded the rest of us when one of the grenades landed close. We did the best we could to help him . . .” The soldier trailed off as he indicated a man lying in the most protected spot the small space had.

Rubin immediately went to Jerry and uncovered the man’s body. He glanced up at Malichai with a slight shake of his head. If he makes it, he’ll lose both the arm and the leg.

Get started on him.

Rubin glanced around at the other soldiers, all looking at him with hope. He ducked his head over Jerry’s arm, looking for a vein.

Rubin was a GhostWalker, enhanced psychically as well as physically. He was one of the ultra-rare—a psychic surgeon. If his assessment was that Jerry was going to lose his arm and leg, then no one could save those limbs. Rubin would do his best, and that meant Jerry would most likely live, but there was little chance he would live with all four limbs intact.

“We’ve got supplies. Not a lot, so you’ll need to ration.” As he spoke, Malichai tore open the thin packets with the blankets in them that would provide enough warmth to survive in the time they had to wait for extraction. He examined each man, making quick assessments.

The appointed leader went on with his report. “Jack Torren has two bullets in him. One caught him on the hip and the other along his ribs. Ribs are broken. Hip’s intact. We’re not sure how.”

Jack sent Malichai a faint grin. “I guess I’m too mean to die. I tell them I have superhero bones.”