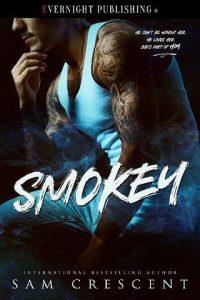 Ava Sinclaire stared into her shot glass. Tequila wasn’t her drink of choice but tonight she was celebrating. The divorce had finally come through. She was a free agent from that lying, cheating scumbag.

“You okay there, sweetheart?” the bartender, Ryan, asked. He’d told her his name the moment she sat at the bar.

“I haven’t seen you around here before.”

“I’m kind of new.” She offered him a smile. Totally new. Three months new. After moving to Fort Clover, Ava had set up her bakery in town and was doing quite well. Her first official day of opening turned a small crowd, which she loved. Everyone in town was so nice to her. They all wanted to know more about her, but the moment she told them all she was in the process of getting a divorce, everyone seemed to accept that.

“Yep. Have you heard of the baker called Ava’s? It’s mine.”

“No shit. I had one of the nicest cream pies from there just last week. You made them?”

“Wow, shit. You do good. I hear you only work three days a week, though, right?”

Someone hollered his name, and within seconds, she was alone again.

Yep, she had her bakery three days a week. Her parents had left her a small fortune that Derek had tried to get from her, but thanks to the prenup her lawyer demanded he sign, she’d been saved from handing over half of her parents’ money.

She rarely used it, or at least had rarely used it until she moved towns and bought herself a small house. It was on the edge of town. Just a small place. Two bedrooms, a nice garden. A space for her to enjoy and relax. After all the drama her ex had put her through, she wanted it.

At thirty years old, she knew it was lame to just want peace and quiet, but she was done with men. Done with all the drama they seemed to entail.

Ryan came back, filled her glass with more tequila, and she thanked him. She didn’t even know if Fort Clover had a cab company. She was way past her limit.

When the bar suddenly went silent, she frowned and turned around to see what the problem was. In the doorway stood not one, but six, or maybe it was three, or perhaps twelve angry-looking bikers. She must be seeing something, or the tequila had gone straight to her head.

The realtor had warned her there was a local motorcycle club hanging around. There had been one close by in the last town she lived in, and that hadn’t been much of a problem.

Spinning back to the bar, she stared down at her shot, wondering why the hell she was even celebrating anyway. Yes, she was finally rid of Derek, but why celebrate that? He’d been wrong for her from the start.

Before he’d entered her life, she had friends, a great job, fun. Her ex had turned her into a woman who slowly stopped seeing friends, stopped going out, and just lived for his approval, only to never get it. He’d chipped away at her armor until she walked in on him fucking his secretary, right in their bedroom. The moment she saw him, it was like a switch had gone off inside her head, and she’d flipped right back to who she was. Only now, she was all alone and ten years older. No kids. No marriage. Fuck all but a nice house, her bakery, and her parents’ money still safely belonging to her.

A large, sexy-looking man took a seat right beside her. The leather cut didn’t have any sleeves and his heavily inked, muscular arms were on full display. She also caught sight of his knuckles. Hell’s was written across them with the apostrophe in the divot between the l and the s.

She’d never gotten any tattoos. It was on her bucket list.

She lifted her glass into the air and knocked it back, nearly choking on it.

“Wow, what are we drinking to, pretty lady?”

His gruff voice went straight to her core. No man should ever be able to turn a woman on with just the sound of his voice. She turned her head to her little neighbor and stared at him. To her surprise, he glanced from her face down to her ass, then back up, lingering for a few seconds on her tits.

She wasn’t a slender woman. Big tits, huge hips, massive thighs, and she didn’t give a flying fuck about it either. After ten years of being told how ugly she was and how she didn’t measure up to Derek, she’d made a vow to never allow a man to see her as small. She’d tossed out every single item of clothing and bought herself a whole new wardrobe.