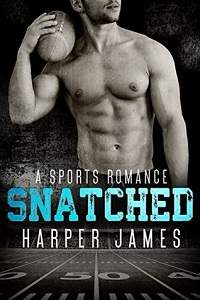 All athletes think they have big dicks, but the guy standing in front of me actually does.

I know this because he opens the door wearing nothing but a towel. A very small towel, one that’s straining to reach all the way around his thick, muscular thighs. Because of the largeness of the man and the smallness of the towel covering him, it’s almost impossible not to get a glimpse of what’s between his legs.

Who the fuck answers their front door wearing next to nothing and showing off their monster cock like it’s a collectible item on display?

“Do I know you?” he asks, looking at me as if I might be a door-to-door vacuum cleaner saleswoman, or maybe even worse.

Which is ridiculous, since I don’t care about football.

Like, not a bit. Negative caring. The actual game, I mean. I like the tailgating and the temporary tattoos and the giant confetti cannons they shoot off in the stadium after a win, even if I do think that’s just asking for a PTSD-related lawsuit. But the actual game? Whatever. Downs and tackles and punts and…bunts?

I don’t care at all about sports.

But going to Harton University means I more or less have to shut up about that fact, because anyone who doesn’t care about football here gets eaten alive. And besides, the one perk of going to a school with a huge and competitive football team? I make good, good money tutoring linebackers that never see the inside of an actual classroom. I’m good at it, too— which is why they’ve sent me to handle the new guy.

“I’m Kenley. Kenley Sullivan?” I say, thinking it might jog his memory. “Your math tutor?” I avert my eyes from what’s going on below his waist and meet his arrogant gaze.

Is it possible I have the wrong house?

I glance down at my phone to double check the address. I’m in Ansley Park, one of the nicest neighborhoods in Atlanta, but it’s not totally insane that a football player would be meeting me for a tutoring session here— there’s a house one of the alumni owns, and my understanding is my new client is staying here to keep a low profile before the first game of the season.

Struggling with math, classes from Florida didn’t transfer, needs to pass first test in order to play, don’t worry about second since it’s after season is over. Thanks!

“Ohhhhhh….right,” Finn replies, nodding. He adjusts his towel, mercifully blocking his, um, parts, from view. Strangely, I’m still visualizing what I just saw, even wishing he hadn’t so quickly adjusted the towel—which makes no sense.

I should not be ogling my student’s cock, no matter how enormous and eye-catching it might be.

“That’s all? That’s all you have to say for yourself?” I manage to ask, incredulous.

“Say for myself?” He smirks. “I don’t have anything to say for myself.” His huge biceps flex as he crosses his arms over his smooth, muscular chest.

My eyes roam momentarily over his tanned skin, noting the finely drawn tattoos in various places, all of which seems to underscore the raw masculinity that permeates the air around him. His muscles are insane. What sort of pushup does someone have to do to work those muscles, exactly? I find myself inhaling, wanting to touch his chest, to see if it’s as hard as it looks.

I push on, trying to take control of the situation. “I’m here to tutor you in math, which I assume you need. And you show up to answer the door half-naked and acting completely rude—”

To say he’s good-looking is a huge understatement. He’s one of those guys that even if you took away the muscles, the height, the flawlessly straight teeth, would still be hot. Maybe it’s his cheekbones? Or the way he carries his shoulders— like he owns everything around him.

“Apparently showering is now considered rude,” he chuckles, shaking his head. “I’ll be sure to make a note of it.”

I sigh and try to control my voice. He’s trying intimidating me with his size, and his looks, and his cockiness -- which makes me think about the glimpse I got of his cockiness, and how big it was, and that makes me wonder what it would be like to touch it…

“Maybe I should come back another time, when you’re actually prepared for our lesson,” I say, forcing my eyes to look away from his body, away from him. I want to glance back again, but instead I force myself to turn and begin walking away, down the steps, moving toward the sidewalk.

“Have a nice day, Kenley,” he calls out in his deep baritone, and I hear the door slam shut, causing my shoulders to rise as I grit my teeth and keep walking.