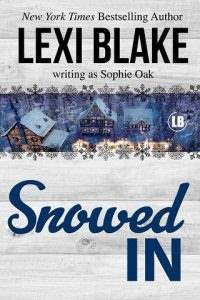 Jessica walked into Gideon’s office, her heart in her throat. Something had gone very wrong with her boss today.

He’d closed the blinds so only a little light filtered into the dim office. Gideon sat behind his desk, his face turned away from her.

She knew the barest bones of what had happened. Reid had slammed out of the office an hour before he would have normally left, his handsome face a mask of rage and pain. Reid was sunny and happy, the light of her day. The fact that he’d barely spoken to her had hurt.

“Gideon?” Her voice sounded small in the huge, opulent office. She could still remember the day she’d walked in for her interview. She’d been awed by the office and the men who ran it. Two lawyers. How had she ended up working for two lawyers?

Maybe it would have been okay if she hadn’t fallen in love with them both.

She was an idiot.

“What do you need, Jessica?” Gideon didn’t bother to turn around. He remained staring at a closed window, but that dark, rich voice rolled over her anyway.

“Are you okay?” It was a dumb question since the answer was obvious.

“Yes. He left with his briefcase and told me he won’t be back until Monday. Did the two of you have a fight?” Occasionally Gideon and Reid would fight over whether to take a case. Reid liked doing a lot of pro bono work while Gideon preferred high-profile cases.

“Oh, dear, Reid and I have had this particular fight for years. We’ll get through it. You should follow him. Go and have a couple of drinks with Reid. He loves spending time with you. He’s crazy about you, you know.”

He was also openly gay. Reid Watkins was one of the most stunningly beautiful men she’d ever met in her life. She often suspected she drooled a little when he walked in a room. But he liked men. Though he didn’t seem to date at all. He spent a lot of his time with her. And Gideon was engaged.

“I don’t know about that. He seemed really angry.”

Gideon waved the thought away. “He’s only angry at me. Everyone’s angry at me today.”

She wasn’t sure why, but it was important that she know what had happened. Somehow these two men had become the center of her life. She cared about them. She was more than half in love with them. “Please tell me what happened. I want to help.”

“Did something happen with Anna?” Anna was Gideon’s gorgeous fiancée. She was everything Jessica wasn’t. Tall, slim, blonde. She looked like she’d walked off the cover of a fashion magazine. Anna and Gideon were the picture-perfect couple. So why had Jessica always thought Gideon deserved more? Anna had seemed utterly cold and uninvolved in anything beyond the endless round of social events she organized.

“Anna called off the wedding. I’m afraid my family is a bit upset with me. Father hand-picked Anna, you know. They are no longer going to fund my election run.”

Since the moment she’d walked in the office, she’d known Gideon was planning to run for a judgeship. From what she could tell it had been part of his life plan since he was a kid.

She’d never spent time with his family. His father had only come into the office a few times, and he utterly ignored her unless he wanted a cup of coffee. From what she could tell, Gideon’s father thought they were back in the fifties and he was the supreme overlord of the family.

It had to have been hard to grow up in that household.

“I’m sorry.” She moved around his desk.

He was in real need. He’d been such a good friend to her. After he’d found out she was on her own with no one to lean on, he’d taken over in little ways. He made sure the oil got changed on her car. He’d helped her move into a safer apartment, insisting the one she was living in must house at least five serial killers. He walked her to her car at night. She couldn’t leave him when he was hurting.

She got on her knees in front of him. “I’m so sorry to hear that. Do you want a drink?”

His eyes were deeply hooded as he looked down at her. “I’ve already had a drink. Or four. I lost count. I don’t need another drink, and if you don’t leave very soon, you’re going to become intimately acquainted with what I do need. I think it would be best if you left now. I’m on the edge of something nasty.”