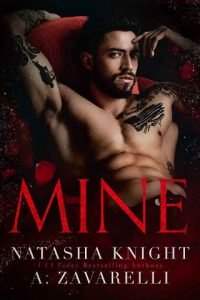 Sometimes, a smell will trigger a memory. Aftershave. His particular brand. Other times, it’s music—like the heavy metal he’d play that sounds so much like the beat on the dance floor.

Tonight, everything has been made more intense by the vodka I consumed before we even got to the club. That and the little pill Nina gave me.

He’s not here, I tell myself. It’s not possible.

I’m being paranoid. And I need some air.

After making my way to the back of the club, I pull the heavy metal door open. I’m shocked by the cold air as the door closes with a clang behind me, shutting out the music and the people. Leaning against the brick wall, I look around and meet the eyes of a woman taking the last drag on her cigarette before dropping the butt and stamping it out under her boot.

She doesn’t smile but neither do I as her boyfriend leads her back inside.

My head is spinning. Closing my eyes, I draw in what I hope will be a steadying breath. The cold helps, at least.

The door opens again, and I hear music and voices. Men’s voices.

Opening my eyes, I straighten, my back stiffening when I look over to find there are three of them.

When they spot me, they stop talking to take me in, openly looking me over.

One grins, then steps forward. “Smoke?” He holds out a half-empty pack of cigarettes.

The nightclub is full, but we’re the only ones outside.

“No, thanks,” I say, pushing through them to catch the door and slip back inside before it closes all the way.

I catch my reflection in one of the mirrored walls and almost don’t recognize myself with my new hair. Magenta. It was an extravagance, but you only turn nineteen once. I scan the club for Nina and spot her on the dance floor with a couple of guys.

She sees me and flashes a smile. I feel my mouth stretch into one too and touch my face. It feels numb. I’ve taken Ecstasy once before, but it didn’t feel anything like this.

The music is getting to me. It’s the constant beat. My heart is hammering to keep pace with it, and the smell of sweat and alcohol and too many people is making me nauseous.

I’m about to head to the dance floor to tell Nina that I don’t feel good when the door opens, and the guys who were just outside come back in a waft of cigarette smoke.

When the man who offered me the cigarette sees me, one side of his mouth curves upward. He walks toward me, and his friends fall into step behind him.

I turn to walk away, but one of his friends moves around to block me.

“Where are you going?” he asks.

I change direction, but the other one is in front of me now. I turn again, but I’m blocked by the third man. I feel dizzy as I glance beyond them to the dance floor, but I can’t see Nina anymore.

He’s talking again, the leader, but the music’s too loud and his words sound hollow. I scan his face, then his friends’ faces. They appear almost demonic, and behind them, the room is spinning in a sea of technicolor lights.

“Excuse me,” I say, trying to push through the wall they’ve made to block me.

Their leader steps directly in front of me, cutting me off. When I back up, he plants his hands on the wall on either side of my head, effectively caging me in.

“Don’t be like that. We just wanna have some fun.”

He leans toward me. “I don’t see a boyfriend.” He lets his gaze run over me. “In fact, you look like you’re looking for one the way you’re dressed.”

I’m wearing black from head to toe, faux leather pants that hug my curves a little too tightly, a corset top, lace fingerless gloves that go halfway up my arms and high heeled, lace-up boots. Not out of the ordinary for this place although I did borrow the entire outfit from Nina and it’s definitely not my usual style.

“Well, I’m not.” I try to slip out from underneath his arm, but he just shifts his body, once again blocking me. “Get away from me.”

“One dance with me and my friends. Right here. I’ll go first.”

Lights pulse around us, making me feel sick. I slump against the wall, unsteady in the high heels of the boots. I don’t know what he reads in that, though, because next thing I know, he’s pressed up against me.

“Are you deaf?” I hear myself ask as I try to push him backward. The walls seem to be vibrating around me, the bass pounding against my head and in my chest. Or is that my heart? I need to get out of here. “I’m warning you to get off me.”