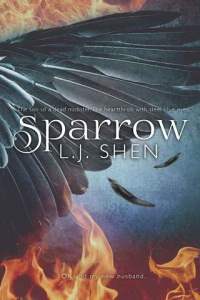 “Though she be but little, she be fierce.

SILENCE. THE MOST loaded sound in human history.

The only sound audible was the click, click of my Derby shoes against the mosaic floor. I closed my eyes, playing the game I relished as a kid one last time. I knew the way to the confession booth by heart. Been a parishioner in this church since the day I was born. I was christened here. Attended Sunday mass here every week. Had my first sloppy kiss in the bathroom, right fucking here. I would probably have my impending funeral here, though with the legacy of men in my family, it wouldn’t be an open-casket event.

It was there, the wooden box where all of my secrets were once buried. The confession booth.

I opened the squeaking door and blinked, the smell of mold and the sour sweat of sinners crawling into my nose. I hadn’t set foot in reconciliation in two years. Not since my father died. But I guess confessions were like riding a bike—once you learned, you never forgot.

Though this time, things would go down differently.

It was an old-fashioned booth, in an old-fashioned church, no living-room bullshit design and fancy, modern crap. Classic dark wood covered every corner, a wire grille divided the priest and the confessors, with a crucifix hung above it.

I settled in my seat on the wooden bench, my ass hitting the scarred pew with a bang. At 6’4”, I looked like a giant trying to fit into a Barbie Dream House. Memories of sitting here as a boy, my legs dangling mid-air as I told Father McGregor about my small, meaningless sins raced through my mind, tangling into a messy ball of nostalgia. The thought of how big my sins were turning out to be would make McGregor sick to his stomach. But my rage toward him was stronger than my morals.

I folded my suit coat on the bench beside me. Sorry, old man. Today you’ll meet the maker you’ve been preaching about all these years.

I heard him sliding his side of the screen open with a screech, clearing his throat. I did the sign of the cross, reciting, “In the name of the Father, and the Son, and the Holy Spirit.”

His chair creaked, his body stiffening at the sound of my voice. He recognized me. Good. I relished the thought of his death, and to some people I guessed that would make me a psychopath.

But it was true.

I was fucking thrilled. I was a monster, out for blood. I was vengeance and hate, fury and wrath.

“Son…” His voice trembled, but he stuck to the usual script. “How long has it been since your last confession?”

“Cut the bullshit. You know.” I smiled, staring at nothing in particular. Everything in the place was so goddamn wooden. Not that I expected an interior designer’s touch, but this shit was ridiculous. It looked like the inside of a coffin. Certainly felt like one.

“Can we move on?” I cracked my neck and rolled up my sleeves. “Time is money.”

I clenched my jaw, balling and releasing my fists.

“Nice try.” I paused, checking my Rolex. His time was running out. Mine, too.

“Bless me, Father, for I have sinned. Two years ago, I killed a man. His name was Billy Crupti. He shot a bullet straight into my father’s forehead and blew out his brains, causing my family pain and devastation. I killed him with my bare hands.”

I let the weight of my confession sink in and continued. “I cut his arms and legs, just enough so he wouldn’t bleed to death, tied him up and had him watching as a pack of fighting dogs fought over his parts.” My voice was eerily calm. “When everything was done and dealt with, I tied a weight to his waist and threw him from a commercial pier on the bay, still twitching, to die a slow, painful suffocating death. Now tell me, Father, how many Hail Marys for a murder?”

I knew he wasn’t the type to bring a cell phone into the booth. McGregor was too old and cocky for modern technology. Even though he went rogue on my father, he never imagined he’d be caught. Least of all by me. Least of all like this. I waited patiently for two years for the perfect moment. For him to be exposed, off-guard and alone at church.

Now, as I confessed my sin, he knew I was going to wait at the other end of the booth and claim his life, too. He had no way out.

He was mostly silent, calculating his next move. I heard him swallow hard, his fingernail scraping at the wooden chair he sat on.