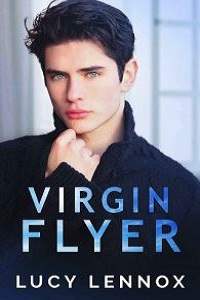 “Who the hell is still a virgin at age twenty-six?”

Chris asked the question, gesturing with his overfull beer glass and sloshing some of the foam onto the sticky table below. “I told her that was bullshit. Any guy who claims to still be a virgin at our age is just lying to get into her pants quicker. Or he’s got an embarrassing little problem in his pants. One of the two.”

As our friends laughed around the crowded table, I hoped the dim lights of the bar hid my splotchy face. My cheeks were so hot they’d probably steam outside in the frigid January air, but in the crowded space of the neighborhood pub, I began to sweat.

Jay’s laugh turned into a giggle as he reached out to high-five Chris. Jay was noticeably drunker than the rest of the group since he’d gone out for birthday drinks with his coworkers before meeting up with us at the pub. His tie was half-untied, and his black hair stood out in messy spikes. “And if he was gay… dude would have even less chance of still claiming a purity ring.” He turned to me with his trademark grin. “That ‘virgin’ crap is heteronormative bullshit. Teo, am I right or am I right?” He moved his palm over to me for another high five.

I glanced at Chris, wondering how it was even possible my best friend of twenty years didn’t know I was still a virgin. But of course I knew the truth. It was because I’d lied to him years ago in a fit of anger and jealousy.

“You’re right,” I said with as much fake enthusiasm as I could.

“Anyway,” Chris continued, “I told her to dump his sorry ass and find someone with more experience in the bedroom. Someone who knows how to find a woman’s special spot. Someone like me.”

Groans and cheers came from around the table as another one of our friends shoved him good-naturedly in the shoulder. Chris raised his hand to get the server’s attention for another pitcher of beer even though his glass was still full enough to leave thick puddles all over the table.

As the boisterous conversation turned predictably toward lewd references and tall bedroom tales that I couldn’t really participate in without lying to my friends’ faces, I wondered just how many more nights like this I could take. How many more years like this I could take. There came a point where I needed to admit defeat. At this rate, Christopher Edward Banks III was never going to be mine. He was never going to give me a chance as long as I was a boring virgin with no experience and he was still trying his hardest to be the good little straight boy his parents thought he was.

I thought back to the night of our high school graduation when we’d been in Veronica Monteserra’s enormous backyard, stretched out side by side on the thick, cool grass looking up at the stars. He’d held my hand and told me he loved me. Even though it had been ten years, I could still feel the soft caress of his thumb as it moved back and forth across my skin.

Chris met my eyes across the sticky barroom table. “You okay?” he asked, leaning forward so we could hear each other better. His forehead crinkled in concern, and my heart did its usual silly flutter.

I swallowed and nodded before trying to reassure him with a small smile. “Long day at work, that’s all.”

His frown deepened. “Have you thought about my offer to come work for us? I hate thinking about you in that place. It’s depressing.”

“Your great-aunt lives there,” I reminded him for the hundredth time as the server leaned against me to place the pitcher of beer in the center of the table. “It’s one of the nicest senior care facilities in the city. Your grandfather told me he’d rather me stay at Wilton to look after her instead of following him around the office all the time.”

Chris’s blue eyes flicked up at the server and narrowed for a split second before he looked back at me.

“It’s the waiting room they put you in before your appointment with the Grim Reaper,” he muttered. “You deserve better. You’re talented, Teo. And no one recognizes it there.”

“I love what I do. I love taking care of people.”

Chris’s face softened. “I know. You take care of me, remember?”

I tried not to give him a goofy, lovesick grin. It was true. I cooked for him when he worked late, and sometimes I ran little errands for him when he was too busy, like picking up his dry cleaning or groceries. It was exactly the kind of thing I enjoyed doing for the people I cared about. Grandpa Banks always teased me for being born in the wrong era. And the wrong gender. “You’d have made someone a nice housewife back in the days when that was an acceptable thing to be,” he’d said on more than one occasion.